Getty The Chicago bears and Eddy Pineiro have just been called out by the mayor.

The mayor of Chicago has now officially weighed in on the recent struggles of the Chicago Bears. Mayor Lori Lightfoot was asked about the Bears’ recent stagnation, and she did not hold back.

While noting that her mother was a huge football fan, Lightfoot said that her mother would very likely be watching the Bears’ game against the Detroit Lions on Thanksgiving day. That’s when Lightfoot got savage in her commentary. “The question is, will it be worth watching? That remains to be seen.”

Lightfoot was then asked if she might have any advice for the currently struggling Chicago Bears team. Her response was swift and devastating, with a resounding ring of truth to it: “Find an offense,” Lightfoot said, before adding: “And Eddy Pineiro, find your leg again.”

When @chicagosmayor gives advice as well as a vote of no confidence to the @ChicagoBears and she may not make her 91 year old mother watch the game on Thanksgiving ? @ABC7Chicago pic.twitter.com/sRSDHAx0ow

The Bears have been one of the league’s more disappointing teams this season, and the two areas Lightfoot highlighted–the offense and special teams, particularly kicker Pineiro–have been arguably the most disappointing aspects of the team. This was a team many felt could make a potential Super Bowl run. Instead, they sit at third place in their division with a 4-6 record and an extremely difficult schedule remaining.

Both the Bears offense and Pineiro sit at the bottom of the league in terms of points scored. The Bears are averaging just 16.9 points a game, and everyone from quarterback Mitchell Trubisky to head coach Matt Nagy have been increasingly criticized. With Pineiro’s recent ineffectiveness, he has now been added to the list.

After All the Offseason Kicking Drama, Pineiro Has Been More Miss Than Hit 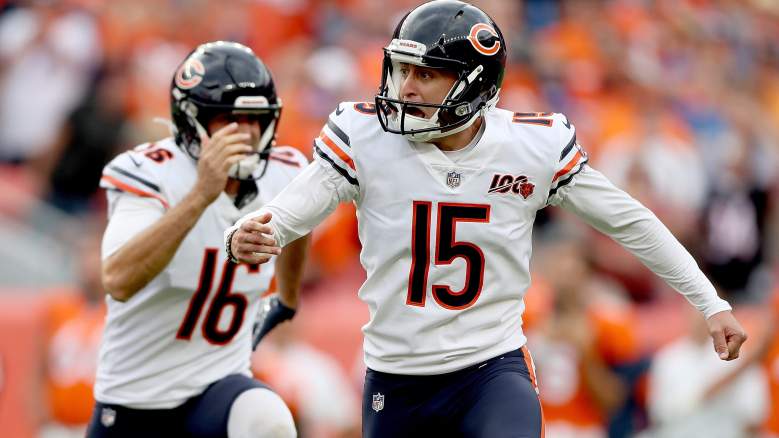 GettyDENVER, COLORADO – SEPTEMBER 15: Pat O’Donnell #16 and Eddy Pineiro #15 of the Chicago Bears celebrate a 53 yard field goal in the final second of the fourth quarter to defeat the Denver Broncos. Pineiro has not hit a game winner since. (Photo by Matthew Stockman/Getty Images)

Pineiro had an excellent start to the season. He hit a 53-yard game-winner against the Denver Broncos Week 2, but he has since gone downhill. He has missed four field goals in his last five games, and he is 2-6 on field goals between 40-49 yards, which is a crucial range in the NFL that kickers must master. Pineiro simply hasn’t.

He is 17-18 on extra points this season, but is 12-17 on his field goal attempts, which is a meager 70.5%. At present, he is the second-worst rated kicker in the league. After all the drama that ensued this past offseason, with the Bears cutting former kicker Cody Parkey before bringing in and trying out over a dozen other kickers, to the conditions they were exposed to, the Bears’ kicking situation became a huge story this summer.

And now, the mayor of Chicago has weighed in. Whether the Bears give her mother a good game to watch this Sunday when they host the New York Giants at Soldier Field–and whether Eddy Pineiro will find his leg again–well, both remain to be seen.

READ NEXT: Former Bears Players Disagree About Whether Mitchell Trubisky’s Injury is Real