The Seattle Seahawks enjoyed their bye week, and a recent report indicates that the team still has faith in running back Rashaad Penny. Detroit Free Press’ Dave Birkett reported the Seahawks turned down the Lions’ offer of a third-round pick for Penny prior to the trade deadline.

“Another RB the Lions were checking in on at the trade deadline: Rashaad Penny. Sounds like Lions were willing to part with a third-round pick for him but Seattle wanted more. They’ll roll with Ty Johnson, J.D. McKissic and Paul Perkins at RB today,” Birkett tweeted on November 3rd.

After Penny received an uptick in carries against the Falcons, there had been rumors that the Seahawks were exploring trading the former first-round pick. Pete Carroll appeared to publicly campaign with other teams to make a deal as the deadline approached but was not specifically referring to the running back.

“I don’t think [the NFL trade deadline is] going to entertain me as much as I would like,” Carroll said, per The Seattle Times. “It seems kind of quiet. As much as we work to get to this point to understand what’s available and what’s going on — like we say, we’re always in on it. But I’m hoping things start to pick up a little bit. Just for fun.”

Penny has received just six carries in the last two games but provides the Seahawks with insurance if Chris Carson were to sustain an injury. The former San Diego State back was the No. 27 pick in the 2018 NFL draft. Despite being a first-round pick, Penny has not been able to win the starting running back job during his young NFL career.

Rashaad Penny is a dawg ?? pic.twitter.com/r1gziF9Knv

Some of Penny’s challenges have been tied to the play of Carson who has emerged as one of the best running backs in the NFL. Prior to the season, Carroll noted that Penny would have an opportunity to earn more touches.

“I’m hoping to see him compete to be the best runner in the program – I want to see him be great,” Carroll told USA Today. “I’ve told him that a couple different times. He should be going for it in every phase of our game. He’s talented, he’s explosive, he’s in great shape. He’s the smartest he’s ever been, he can catch the football, his pass protection has improved. Every aspect of his game is at it’s best.

Carson Ranks as One of the Top 10 NFL Rushers

Aside from fumbling issues, Carson has been a bedrock for the Seahawks offense and ranks among the top-10 running backs in rushing yards. Carson’s 853 yards puts him seventh among running backs so far this season. Carson’s 200 carries ranks third in the NFL showing just how much faith Carroll has in his lead back.

For now, Penny’s role continues to be minimal as he spells Carson as needed during games. We will see if the young running back can carve out more of a role as the season reaches the stretch run. 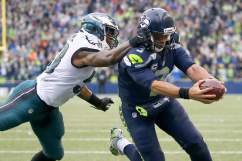