Getty Dan Mullen pictured with Dak Prescott during their time together at Mississippi State.

Dan Mullen is just one of the latest names to be linked to the Dallas Cowboys head coaching job if Jerry Jones opts to move on from Jason Garrett. Mullen is currently the head coach at Florida and coached Dak Prescott at Mississippi State. NFL Network’s Daniel Jeremiah mentioned Mullen as a potential fit for the Cowboys during a recent episode of the Move the Sticks podcast.

“Dan Mullen is one that I found interesting…I just thought the Dallas Cowboys and Dan Mullen was an interesting fit for a variety of reasons,” Jeremiah explained during the podcast. “Obviously, the relationship with Dak Prescott. [He] can bring some of the college offense and the quarterback run game that Dak [is] plenty capable of doing. And then also, he is not a star that is going to outshine Jerry Jones, which seems to be kind of the three criteria you would need to get that job. And I think that when you add some of those factors up, while I have not seen it anywhere, it actually makes a little sense to me.”

Jeremiah mentioned Mullen’s connection to the Cowboys during an interview with The Athletic’s Bruce Feldman. The college football insider agreed that Mullen and the Cowboys could have some legs if there was interest by both parties.

“You mentioned this to me I remember after my drive back from the Bedlam game…I was like, ‘That makes a lot of sense,'” Feldman noted. “I haven’t heard it either. I told some people I work with about your theory and it lines up. Now, that’s not saying I’ve talked to Dan Mullen or talked to anybody who represents him. But in terms of that, if he has a remote interest in being an NFL head coach or being on that big of a stage. Man, that would be tempting. We’re talking about a guy from New Hampshire going to become the head coach of the Dallas Cowboys with the guy [Prescott] you developed as the front of it. That’s an interesting one.”

Jones has done little to provide Garrett with job security beyond this season. The Cowboys are unlikely to make a move until the offseason, but Jones is clearly disappointed with how 2019 has played out.

Jones’ comments on Garrett have been convoluted as he recently noted that the current Cowboys coach would be “coaching in the NFL next year.” Not exactly a ringing endorsement that Garrett will remain the Cowboys head coach.

“Nobody has the exclusive skills to get the job done so that collectively you can win a Super Bowl,” Jones said, per The Athletic’s Jon Machota. But there are qualified people. Jason Garrett is one of them. In my opinion, Jason Garrett will be coaching in the NFL next year.”

From @NFLGameDay: The #Cowboys won't fire Jason Garrett midseason, but why is #Oklahoma coach Lincoln Riley a name to watch if they do? The Jones family already is close to Riley thanks to the courtship of walk-on QB John Stephen Jones… who ended up at Arkansas. pic.twitter.com/qgUgSexs9h

Mullen is not the only college coach to be linked to the Cowboys. Unless the Cowboys’ season turns around, there are going to be plenty of rumors surrounding the Cowboys’ coach heading into the 2020 season. NFL Network’s Ian Rapoport reported that Jones has a “close” relationship with Oklahoma head coach Lincoln Riley thanks to the recruitment of his grandson.

“From @NFLGameDay: The #Cowboys won’t fire Jason Garrett midseason, but why is #Oklahoma coach Lincoln Riley a name to watch if they do? The Jones family already is close to Riley thanks to the courtship of walk-on QB John Stephen Jones… who ended up at Arkansas,” Rapoport tweeted. 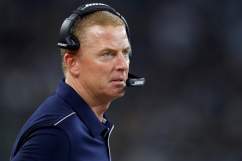 Read More
College Football, Dallas Cowboys, Football, Mississippi State, NFL
Could Dan Mullen be the next coach of the Dallas Cowboys? Find out why one analyst believes Mullen could be a candidate if Jason Garrett is fired.