It has been one tough year for the Washington Redskins and their second-year running back, Derrius Guice.

Guice played Week 1 against the Philadelphia Eagles, where he had 13 total touches, and where he also injured his knee. He tore his meniscus in that game, and had surgery on his knee in early September. He ended up missing weeks 2-10 of the season this year, and he returned Week 11 for Washington’s game against the New York Jets.

He displayed flashes in that game, catching a pass for a 45-yard touchdown. Week 14 against the Green Bay Packers, Guice injured his knee again, although thankfully, this time he won’t require surgery, although his first season with the team is officially over, per Adam Schefter:

Guice had 42 rushes in five games this season for 245 yards and two touchdowns. That’s an average of 5.8 yards per carry.

Guice Called Hit He Was Injured On ‘Cheap Shot’ 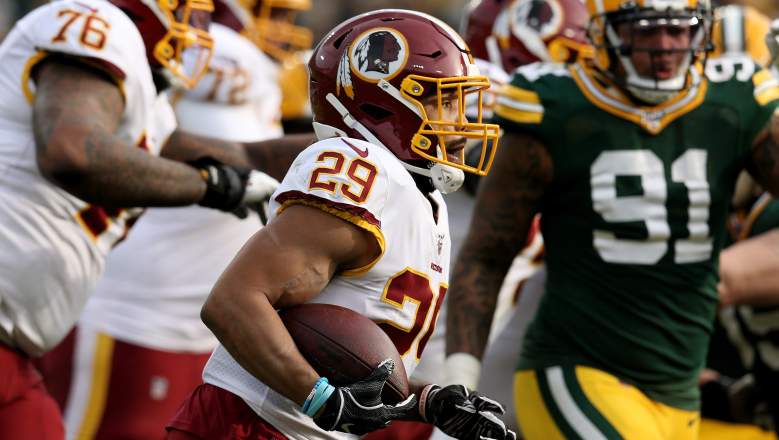 GettyGREEN BAY, WISCONSIN – DECEMBER 08: Derrius Guice #29 of the Washington Redskins runs with the ball in the second quarter against the Green Bay Packers at Lambeau Field on December 08, 2019 in Green Bay, Wisconsin. (Photo by Dylan Buell/Getty Images)

Guice managed to avoid another ligament tear, but he still expressed annoyance with the hit on which he was injured. Guice sprained his MCL on a hit sustained by Packers’ safety Darnell Savage. In a comment he has since deleted, Guice replied to a fan regarding the play, saying of Savage: “I think it was a cheap shot!! He knows the history of my knee injuries and went straight at them…”

Guice walked off the field on his own power, and while he has had a rough start to his very young career, he had a few veterans looking out for him. After the team’s loss to the Packers, Redskins running back Adrian Peterson said of Guice and his injury: “I know what he’s been through, and that’s the last thing he needs,” Peterson said. “I told him to take the positive side of things. It could have been worse.”

Guice’s best game of the season came Week 13 against the Carolina Panthers. Guice ran the ball 10 times for 129 yards and two touchdowns, and he again showed flashes as to why the Redskins took him in the second round of the 2018 NFL draft.

Guice is slated to be a huge part of the franchise’s future, and the team’s placing him on the injured reserve list at this point in the season seems like a preventative measure, and a solid way to try to protect him so he can avoid serious re-injury in a season where he cannot seem to catch a break.