Getty Lamar Jackson is not related to Samuel L. Jackson.

Lamar Jackson is having a stellar NFL season, but there has been some confusion among football fans over his relationship to Samuel L. Jackson. The two celebrities share the same last name but are not related to each other. They may not be related but Samuel is well aware of Lamar’s game as the actor has been following him since his college days at Louisville.

Samuel posted a viral photo of Traveon Samuel and Lamar Jackson sitting next to each other on the Louisville bench back in 2016. The jerseys happened to spell out “Samuel L. Jackson.”

The actor discussed the photo of Lamar back in 2016 on The Tonight Show With Jimmy Fallon.

“This kid might win the Heisman Trophy,” Samuel noted pointing to Lamar. “But yeah, the wide receiver, quarterback it kind of serendipitous.”

Lamar’s Father Died When He Was 8 Years Old

The quarterback’s full name is Lamar Jackson Jr. as he shares the same name as his late father. Lamar Jackson Sr. died in a car accident when he was just eight years old. Lamar discussed the tragedy during his Heisman Trophy acceptance speech.

“But back to my mother. She put so much into me, like I said before, losing my father and my grandma on the same day,” Lamar said, per UPI.com. “It hurt me. I wanted to cry real bad, but my mom was the real soldier, because I was going to be the baby, the female that day. But she told me, ‘Lamar do not cry,’ and I’ll remember that for the rest of my life.”

Lamar was raised by his mother, Felicia Jones, who developed an extremely close relationship with her son. Felicia served as Lamar’s manager during the predraft process as the quarterback opted to lean on his mom rather than sign with an agent.

Lamar Is a Fan of Old-School Television Shows

Lamar has a number of favorite television shows but prefers to keep it old-school. The Ravens quarterback provided a rundown of his favorite TV shows in an interview with The Undefeated.

“I have a few. Martin, The Wayans Bros., The Jamie Foxx Show, The Fresh Prince of Bel-Air, Proud Family,” Lamar explained to The Undefeated. “I love a lot old Cartoon Network shows too.”

For Halloween, Lamar dressed up as Harry Potter, but it does not sound like he will be competing with Samuel for acting roles anytime soon. Lamar admitted that he has trouble staying awake during the Harry Potter movies.

“I watched a few movies, but it’s pretty long,” Lamar said, per CBS Baltimore. “I get sleepy. I get sleepy, I’ll be watching it for a good hour then I just doze. Then Harry Potter start watching me.” 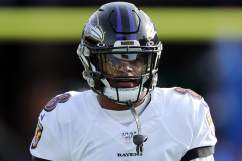