Getty Trevor Lawrence and Justin Fields are fighting to be the top quarterback in the 2021 NFL draft.

Trevor Lawrence and Justin Fields are both top NFL draft prospects, but neither quarterback is eligible to turn pro until 2021, at the earliest. Lawrence and Fields will be battling their junior seasons in what has become a close race ahead of the 2021 NFL draft.

Walter Football has Lawrence as the No. 1 pick and Fields as the No. 2 pick in their early 2021 NFL mock draft. These two quarterbacks have been battling since high school as both were five-star recruits, and analysts were split on who was ranked as the top quarterback heading into college.

Lawrence benefitted from being able to play his freshman season, but Fields has narrowed the gap since he arrived in Columbus. Both players have their respective teams as championship contenders, a trait NFL GM’s are sure to love.

Here is a look at the NFL draft profiles for Fields and Lawrence.

STRENGTHS: Fields can hurt teams in the pocket thanks to his quick release, but he also makes defenses pay with athleticism. Fields is remarkably efficient and rarely makes mistakes.

The Ohio State quarterback has only thrown one interception heading into the Big Ten title game. Fields has thrown for 2,654 yards and 37 touchdowns while completing more than 68 percent of his passes. Fields has also hurt opponents with his legs running for 470 yards and 10 rushing touchdowns.

Sports Illustrated’s Albert Breer reported in October that Fields is very much in the conversation with Lawrence to be the No. 1 pick in 2021.

Clemson’s Trevor Lawrence may have competition from Ohio State’s Justin Fields, based on how Fields is playing, to be the first pick in 2021. I’d still [say] Lawrence is a heavy favorite, but that this is even a discussion is a huge [compliment] to Fields.

WEAKNESSES: Fields is sure to get questions about why he did not beat out Fromm at Georgia. Fields’ passing numbers are not as gaudy as some quarterbacks, and NFL teams will continue to scrutinize his play in the pocket. As Lawrence found out this season, it is hard to maintain a high level of success once expectations are raised after a stellar season.

STRENGTHS: It is hard to argue with Lawrence’s success on the field. Lawrence led Clemson to a national championship in his freshman season, displacing a good quarterback in Kelly Bryant. Lawrence has been labeled by some as the best quarterback prospect since Andrew Luck.

Heading into the ACC Championship, Lawrence threw for 2,870 yards, 30 touchdowns and eight interceptions while completing 68.6 percent of his passes this season. Lawrence has the size (6’6″ 220 pounds) and athleticism NFL teams covet at the quarterback position.

WEAKNESSES: Lawrence got off to a slow start, but closed the season out nicely. The Clemson quarterback has made more costly throws than he did his freshman season. Bleacher Report’s Matt Miller reported one NFL talent evaluator believes there will be some regression for Lawrence after the hype train got out of control.

“I tried to tell you guys … Y’all got all over him way too fast and got caught up in the hype,” the source told Bleacher Report. “There were concerns last year, and his offense really just bailed his a– out— as did his defense.”

Lawrence has been nitpicked a bit after all the offseason praise, but he is still the favorite to be the No. 1 pick in 2021. If Lawrence was eligible, he would be one of the first quarterbacks selected in the upcoming draft. 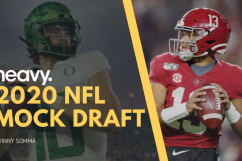