The Kansas City Chiefs will be heading back to the Super Bowl for the first time in 50 years, and for one person in particular, watching the team take home the Lamar Hunt trophy would be beyond significant.

American Football League founder and the man who gave the Super Bowl its name, Lamar Hunt, is survived by his wife Norma, who, after Super Bowl LIV Sunday, will have attended all 54 Super Bowls. She attended 40 of them with Lamar, and even after he passed away in 2006 at the age of 74, she has gone to every single one since.

When the Chiefs finally got over the hump and beat the Tennessee Titans in the AFC Championship this year, the matriarch of the franchise got to hoist the trophy named after her husband for the first time. She and Lamar had two children (he also has two others from his previous marriage), and their son, Clark, inherited Hunt Sports Group LLC after Lamar’s passing. He now owns the Chiefs.

“It was incredibly special for our family and especially for the fans,” Norma Hunt said about her team winning the AFC Championship. “I am just so happy for them most of all, but also for Lamar’s great legacy for us to finally make it back. But it was also special to see Clark holding that trophy because of how hard he has worked to get the Chiefs to this point. He has done a terrific job, and I’m just so proud of him.”

Norma Hunt on Super Bowl LIV: ‘Opportunities Like This One Don’t Come Around Often’ 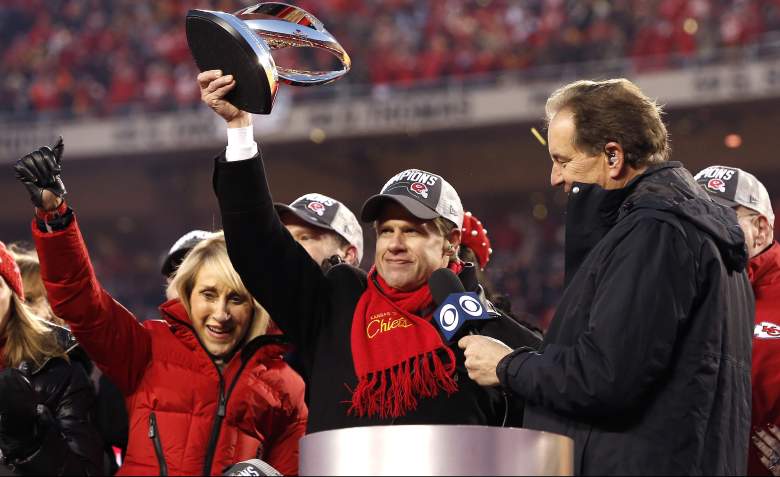 GettyNorma Hunt watches as her son, Kansas City Chiefs owner and CEO Clark Hunt holds up the Lamar Hunt trophy after defeating the Tennessee Titans in the AFC Championship Game at Arrowhead Stadium on January 19, 2020 in Kansas City, Missouri. The Chiefs defeated the Titans 35-24. (Photo by David Eulitt/Getty Images)

The Chiefs’ only Super Bowl was won back in 1970, in Super Bowl IV. “It sure has been a long time,” Hunt said about her team’s return to the big game. “After all of these years in pro football, I’ve learned that opportunities like this one don’t come around often, which is why it’s important to take advantage of them. I wouldn’t say I was ever worried, but I’m certainly glad the fans don’t have to wait another year to see their Chiefs in the Super Bowl.”

According to Clark, his mother can be quite the passionate fan while in attendance, as well. “My mom is an unbelievable sports fan, but she has a passionate edge,” Clark has said. “My dad was always very, very calm no matter the circumstance. When my mom’s at a game, she really gets into it and can be very outspoken in her support of the team or what she sees on the field that she doesn’t like, particularly as it relates to the referees. I try to emulate my dad, but sometimes my mother’s genes in me sneak out.”

On Sunday, she’ll have one more opportunity to cheer her team on yet this season.

READ NEXT: Super Bowl LIV Uniforms: What Jerseys Will the Chiefs and 49ers Wear?