Tom Brady’s contract with the New England Patriots ends after the team’s playoff run causing some fans to wonder if the quarterback is heading towards retirement. Brady has consistently maintained that his goal is to play, at least, until he is 45 years old, which would be another three seasons. The Patriots quarterback once again noted in an October interview on Jim Grady’s radio show that he hopes to play until he is 45.

“Yeah, I certainly hope so,” Brady said, per CNN.com. “You’re right, I have expressed that. A lot of times, I think it is important for athletes to have short-term goals and long-term goals. I have set that number for a long time, and I work pretty hard at it every day. I think that part of me being a professional, giving my best to the team, is making sure my body is in great condition, that I am able to take the field. I take a lot of pride in that…Hopefully, to afford myself the ability to play as long as I want to play. I also really love the sport and I enjoy playing. So, not many things have changed on that front.”

While Brady has maintained his goal of playing until he is 45, the quarterback has also given himself some wiggle room in case he opts to retire after the season.

During an October interview with WEEI, Brady remained non-committal about his status with the Patriots for the 2020 season. Brady will be a free agent after the season, and the Patriots cannot franchise tag the quarterback thanks to an agreement in his current deal.

“That is the great part for me, I don’t know,” Brady told WEEI. “I think that has been a unique situation that I have been in because I think when you commit to a team for a certain amount of years you kind feel like (there is) the responsibility to always fulfill the contract. For me, it’s been good because I am just taking it day-by-day and I am enjoying what I have. I don’t know what the future holds and the great part is for me, football at this point is all borrowed time…One day I will wake up and I will feel like, ‘OK, that will be enough.’ When that day comes, that day comes. I don’t know if it will be after this year. I don’t know if it will be five years from now…”

Brady’s recent real estate moves have heated up rumors that the quarterback will either play with a different team next season or retire from the NFL. During the regular season, news broke that Brady and Gisele had put their Brookline, Massachusetts home up for sale.

The source added, ‘Tom and Gisele are quietly looking at homes in Connecticut. The plan is that he would divide his time between New York and LA in his post-NFL career, likely starting a number of businesses based in health, sports, apparel and broadcasting.’

Brady’s options are open and only he knows exactly what his plans are for next season. There is also a possibility Brady signs a new contract with the Patriots in the offseason.

With Brady reiterating he wants to play a few more seasons, it appears unlikely that the quarterback will retire after the season. We will most likely see Brady under center for the Patriots or another team in 2020. 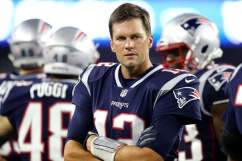