Getty The XFL rules differ slightly from the NFL.

The XFL rules are very similar to the NFL, but the new football league differs in a few key ways. Some fans may remember the initial launch of the XFL with its crazy kickoff rule and wrestling-like gimmicks prior to its eventual folding. XFL 2.0 is intended to be different and used as a league where players can get noticed by NFL front offices.

While the XFL is aiming to be taken seriously, the new league is doing a few creative things to differentiate itself from the NFL. These include kickoff rules, no extra points and the option for a three-point conversion. The XFL is aiming to provide a high-scoring and faster paced version of its NFL predecessor as ESPN detailed.

Those changes focused mostly on pace of game and a boost in scoring, while discouraging punts and overtime but encouraging kickoff returns. An ideal XFL game, vice president of football operations Doug Whaley said last fall, would have a 34-28 score and be played in two hours, 45 minutes — about 25 minutes shorter than an NFL game.

The XFL categorizes their rule changes into three categories: gameplay innovations, timing changes and common-sense rules. The game-play innovations are tied to kickoffs, points after touchdowns, punts, double-forward passes, and overtime. The timing changes range from a twenty-five-second play clock to one fewer timeout for each team per half. Finally, common-sense rules include a catch only requiring one foot in bounds.

The XFL wants a quicker game and to do this fans will notice a running clock. The clock will not stop on incomplete passes or out-of-bounds plays with the exception of the two-minute mark in each half, per ESPN. There is also no coin toss as the home team will opt to kick or receive at the beginning of each game. Each team only has two timeouts per half, which is one fewer than the NFL.

Teams Can Score as Many as 9 Points on Touchdowns

A touchdown is worth the traditional six points but a team can earn as many as nine points thanks to the option of a three-point conversion. After each touchdown, the scoring team has the option to go for one, two or three points. There is no option to kick an extra point and the defense can return any turnover for a score equal to the number of points the team was attempting. XFL.com details the unique conversion options after touchdowns.

After a touchdown, the team has the option of running a play from the 2, 5, or 10-yard line, worth 1, 2, or 3 points respectively. The team must run an offensive play and no kicking plays are allowed.

Teams Are Allowed to “Double-Pass” Behind the Line of Scrimmage

One of the more unique XFL rules centers around the “double-pass.” Offensive players can attempt an additional forward pass as long as the ball is behind the line of scrimmage. The XFL detailed why the rule could add excitement to games. 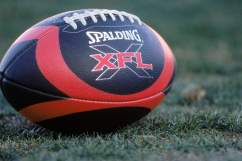 XFL Fantasy Football: Where Can you Play for New League?