Getty The Seahawks are not out of the running for Jadeveon Clowney.

Jadeveon Clowney remains not only the Seahawks’ top priority but the No. 1 rated available free agent by most analysts. As Clowney continues to assess the market, the pass rusher could opt to sign a short-term deal in hopes of receiving a more lucrative contract in the future, per ESPN’s Jeremy Fowler.

Clowney is seeking an annual salary of $20 million but has not been able to find a suitor so far in free agency, per ESPN’s Dianna Russini. All this works in the Seahawks’ favor in retaining the pass rusher.

“Sources say Jadeveon Clowney wants about $20mill per year. Interested teams aren’t coming up that high as of now. Look at the players in his position who were tagged, Judon, Dupree, Barrett, Yannick. Teams don’t want to pay $5mill more than the franchise tag,” Russini noted to Twitter.

Clowney Has Assured Teams That He Is In Good Health

Clowney did have a core muscle injury last season that caused him to miss three games. The pass rusher had surgery this offseason but has assured teams he is in good health, per NFL Network’s Ian Rapoport.

“Obviously, this is someone Seattle would love to bring back just considering how disruptive he was last year,” Rapoport explained on NFL Network. “You have to think that this is a priority for Seattle, but there has been some questions just about his injuries and his health. So, here’s my understanding of where things stand. About two months ago, Clowney had sports hernia surgery and as we speak right now, he is working out in Houston…He is healthy. The only other injuries he has had: a sports hernia coming out of college and a microfracture early in Houston. With all of the talk of injury history, he is really healthy and certainly ready to go for some team.”

The News Tribune’s Gregg Bell predicts that the Seahawks will eventually reach a deal with Clowney. With the market drying up, the Seahawks chances of retaining Clowney continue to increase, even if it is just for another season.

“I’ve gotten the distinct sense since Sept. talking to Jadeveon Clowney multiple times about it that he really wants to stay with #Seahawks. Money talks, obv. But that $ seems so close now/no one blowing him away I’m sticking with belief I’ve had since fall: that he’s re-signing,” Bell said on Twitter.

The biggest threat to the Seahawks re-signing Clowney is a team swooping in and offering the pass-rusher a one-year deal with a salary north of $20 million. So far, the Seahawks have made multiple small signings indicating the focus of their free agency continues to be bringing back Clowney. 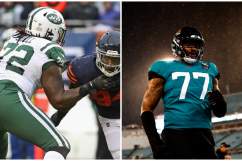 Seahawks Load Up on Offensive Lineman in NFL Free Agency