Getty Michael Bennett is retiring from the NFL.

Pass rusher Michael Bennett is one of the most memorable Seahawks from the team’s Super Bowl run. Former Seahawks edge rusher Cliff Avril could see a Seahawks reunion if Seattle makes an offer to Bennett in free agency. Avril calls Bennett his “best friend” and explained to 710 ESPN Seattle why the pass rusher is interested in returning to Seattle.

“I do think if the opportunity presented itself to possibly finish in Seattle, I wouldn’t be surprised if he took that because we talk about this all the time,” Avril explained to ESPN 710 Seattle. “It’s not just Michael Bennett, but it’s Earl (Thomas) and Kam (Chancellor), it’s all of us and we get together and we all talk about how fun it was to be together.”

After Seattle traded the defensive end, Bennett spent time with the Eagles, Patriots and Cowboys. His production has not been what it was in Seattle, and Avril noted the Seahawks’ culture is a bit different than most teams in the NFL.

“He’s been to a few different cities in three years and he realized and understands the difference in culture, the difference in the type of players who were in the locker room and different things like that and it doesn’t compare,” Avril noted, per 710 ESPN Seattle.


Bennett Confirmed He Would “Love” End His Career With the Seahawks

Shortly after Avril’s interview, Bennett confirmed his interest in a return to Seattle on the Talkin’ Seahawks podcast. The pass-rusher admitted he would “love” to end his career with the Seahawks.

“I would love to end my career in Seattle,” Bennett said, per Yahoo Sports. “It’s not up to you, though. It’s up to the team.”

Bennett elaborated on what his potential role with the Seahawks could be if the team was open to bringing him back.

“I think it could be good,” Bennett explained, per Yahoo Sports. “It’s always good to have a good veteran defender that can help young guys. A lot of guys have skill in the NFL, but a lot of them don’t know how to study tape. Having a guy who knows how to study and could bring in some veteran leadership to go along with some great young talent, I would always think that’s a good idea.”

Bennett Could Likely Be Signed to a Bargain Contract

As Avril pointed out, Bennett could now be signed to a cheaper contract than when the team negotiated with him in his prime. Signing Bennett likely has little impact on what the team does with Jadeveon Clowney in free agency, but it does add a bit of depth on the defensive line.

Bennett is only one year removed from nine sacks with the Eagles in 2018. Bennett’s best statistical season came in 2015 when he notched 10 sacks along with 52 tackles with the Seahawks. The pass rusher finished with 6.5 sacks last season during his time with the Patriots and Cowboys.

The Seahawks received just a seventh-round pick from the Eagles when they traded Bennett. It was a fraction of the production they received from the defensive end during his time in Seattle. Sports Illustrated’s Albert Breer reported after the trade that Bennett had become a “pain in the a–” for the Seahawks’ coaching staff.

… I wanted to address first what the Eagles are getting from the Seahawks: A player who isn’t quite what he was and picked his spots more than he has in the past, according to the three offensive coaches I asked about him. He was also a pain in the a– for the Seattle coaches.

As we saw last season with Marshawn Lynch, Pete Carroll has consistently been open to reunions, even if things did not end on great terms. The advantage of Bennett is he can rush inside and outside on the defensive line. If the price is right, Bennett would be a great fit as a situational pass rusher. Carroll responded in 2018 to some of Bennett’s criticisms of the team.

“The thing I would tell you about that is that we’ve been through a lot around here, we’ve grown tremendously together and all of that, and changes are inevitable,” Carroll explained, per The News Tribune. “Sometimes, guys can’t hang with what’s expected, for one reason or another—their growth, their development and all of that. 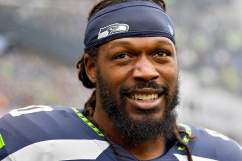