The picks are in. Unofficially and in mock form, of course, at least until the real NFL Draft begins April 23. NFL Draft analyst Mel Kiper Jr.’s latest mock draft for ESPN is good news if you’re a fan of the Chicago Bears. Kiper has the Bears selecting two high-powered offensive contributors in the upcoming draft: tight end Cole Kmet and wideout KJ Hamler.

The Bears are in need of depth at both positions, but many feel the team will likely use the draft to address the offensive line, which is arguably its biggest need. Kiper’s latest mock suggests he thinks Ryan Pace and company could go with the best player available strategy while adding a few potent weapons to Matt Nagy’s offense. 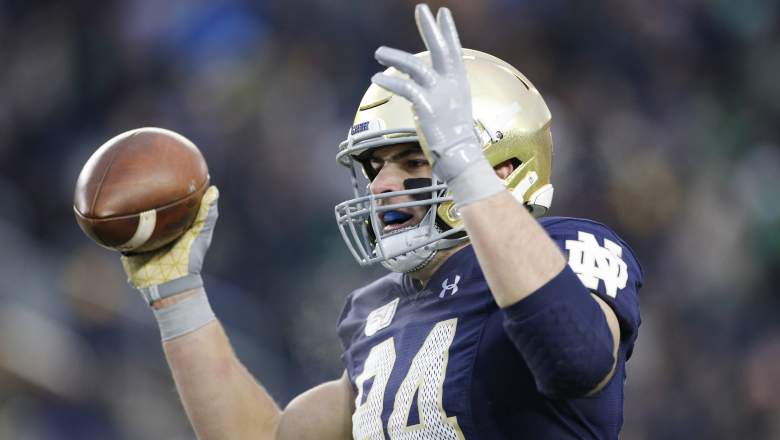 GettyTE Cole Kmet has been projected to go to the Chicago Bears in Mel Kiper’s latest mock draft. (Photo by Joe Robbins/Getty Images)

With their first pick in the draft being in the second round this year, the Bears don’t have a selection until the 43rd overall pick. That’s where Kiper sees the Bears taking Notre Dame’s Kmet. “I’m not sold on Jimmy Graham making an impact this season, and neither Trey Burton nor Adam Shaheen has worked out in Chicago,” Kiper wrote. He sees Kmet as a promising addition to the group.

“Kmet is the best tight end in an unspectacular class, but the talent is there for him to be a good blocker and receiver. This pick comes from the Raiders in the Khalil Mack trade, and the Bears still have their own at No. 50.” Chicago could use some solid blocking from the tight end position, but after signing Jimmy Graham, the Bears may not want to spend one of their valuable second-round picks on the tight end position.

With the 50th selection, Kiper has the Bears taking wide receiver KJ Hamler out of Penn State. In his two seasons with the Nittany Lions, Hamler had 98 catches for 1,658 yards and 13 touchdowns. He averaged 16.9 yards per reception, and was also used a bit in the running game. Hamler has speed, and The Draft Network called him a “human joystick,” a phrase that has also been applied to another speedy and versatile Chicago Bear: Tarik Cohen. Kiper thinks the Bears could add another major weapon in Hamler.

“Whether it’s Nick Foles or Mitchell Trubisky at quarterback in 2020, the Bears need weapons. That’s why I got them a tight end at No. 43, and that’s why I’m going with a wide receiver here. Hamler, who is only 5-foot-9, 178 pounds, is explosive in space and can play in the slot or outside. Though he wasn’t able to work out at the combine because of a hamstring injury, I feel comfortable saying he’s one of the fastest players in the class. His problem last season was drops — he had nine. If he can get that corrected, Chicago will have a really good player on its hands,” Kiper said about the Bears selecting Hamler.

Hamler seems to be a likely pick if he’s still there when the Bears are up at 50. But there’s talk Ryan Pace may trade down this year, so it’s equally possible the team will settle for a few third and/or fourth round picks in exchange for one of their second round selections.

READ NEXT: What Presence of Bears TE Jimmy Graham Could Mean for Trey Burton