Getty Ted Ginn of the New Orleans Saints breaks a tackle against James Bradberry #24 of the Carolina Panthers during the first quarter in the game at Mercedes Benz Superdome on November 24, 2019 in New Orleans, Louisiana. (Photo by Sean Gardner/Getty Images)

The #Bears have agreed to terms on a 1-year deal with veteran WR Ted Ginn Jr, source said. Chicago has been searching for a speed WR, now they have one.

Along with Washington running back Adrian Peterson and Seattle Seahawks tight end Greg Olsen, Ginn is one of three remaining players from the 2007 draft class. He has spent his last three seasons with the Saints, catching 100 passes for 1,412 yards and eight touchdowns. He started 22 games in that time, playing in 36.

His 2018 season was shortened due to a knee injury, but he had 53 catches for 787 yards and four touchdowns in 2017 and he caught 30 passes for 421 yards and two scores last year. Ginn will give the Bears another speedy deep threat in the passing game after Chicago selected Tulane wide receiver Darnell Mooney in the fifth round of the NFL Draft. 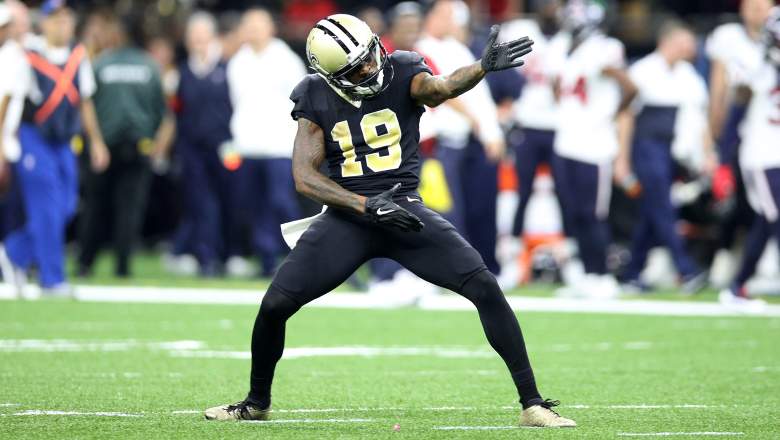 GettyWide receiver Ted Ginn Jr. reacts after a first down against the Houston Texans. Ginn signed a one-year deal with the Chicago Bears. (Photo by Chris Graythen/Getty Images)

A bit of a journeyman throughout his career, Ginn began his career with the Miami Dolphins before he headed to San Francisco for three seasons after that. He spent time with the Panthers and the Cardinals before he settled into a nice WR2/WR3 role with the Saints over the last three years.

As The Athletic’s Kevin Fishbain notes, Ginn had two receptions of 40 or more yards last year– which was what the entire Bears offense managed to muster throughout the entire 2019 season. He’ll bring a legitimate deep threat to the offense, and despite turning 35-years-old in April, Ginn still has a great deal to offer an offense, including his speed. He may has slowed a step, but he’s still a speedster.

Ginn could also be a formidable target for the Bears on third down.

With the addition of Ginn, the Bears now have Allen Robinson as the top wideout and Anthony Miller as the No. 2, although Ginn will give the team some insurance if Miller’s recovery from shoulder surgery doesn’t go as planned. The more intriguing situation to monitor moving forward will be which receivers make the team’s final roster.

The Bears have 2019 fourth-round pick Riley Ridley, along with 2018 seventh-rounder Javon Wims. Wims has been with the team longer, but Ridley was considered a steal by the Bears in the fourth round at the time, so it would be a bit surprising if the team decided to give up on him now. There is also the dynamic gadget player Cordarrelle Patterson, recent draft pick Darnell Mooney, former Packers wideout Trevor Davis, and Thomas Ives, Reggie Davis and Alex Wesley. The latter three will likely be battling for a place on the practice squad, while Ridley, Wims and Davis will likely vie for a roster spot.

Patterson and new draftee Mooney are shoo-ins to make the roster, making this new Bears wide receivers room a bit more crowded — and a lot more interesting — than it has been in recent years.