Former Chicago Bears‘ offensive lineman Kyle Long has never been shy about sharing his opinions, especially on social media. The recently-retired right guard has been very active on Twitter since he stepped away from football, and his sense of humor is usually front and center in his tweets.

Tuesday afternoon, Long weighed in on who his choice would be to take over a recently-vacated play-by-play commentator position at Fox. CBS just replaced former quarterback Dan Fouts with Charles Davis in the booth, which in turn left a vacancy at Fox.

When Sports Illustrated’s Jimmy Traina put forth four contenders to replace Davis as the No. 2 analyst for football games on Fox next season, Long weighed in. 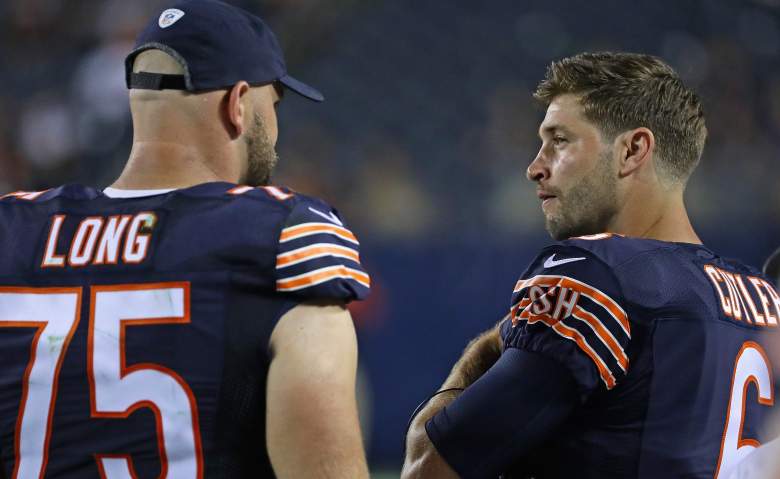 Long, who spent all seven of his NFL seasons with the Chicago Bears (from 2013-2019), played with former Bears quarterback Jay Cutler for four of those seasons (2013-2016) and was a frequent defender of the now-retired quarterback, who left Chicago after the 2016 season. Cutler, who was often criticized for performance inconsistencies, grew close with Long, and Long has often hailed the beleaguered quarterback as an under-appreciated teammate.

Long said the following about Cutler in 2017:

“When I was going through my post-surgery process … I was gone for 3 or 4 weeks from the guys, and Jay is one of the people who made sure I was okay, who checked in on me, asked if I needed anything. He’s the guy who always invites me to his home for Christmas if I’m by myself. On Thanksgiving there’s always a plate with my name on it at his house, which I think is very cool. He goes above and beyond everything that’s football. It spills into life. He’s a great guy … He’s a good friend of mine.

Thus, it’s not surprising that Long retweeted Traina and added Cutler to his list of play-by-play commentators he’d like to see in the booth next season.

Long’s backing of Cutler to get a commentator job isn’t surprising; what is a bit striking is that Long’s brother Chris was one of the four people Traina listed as contenders to fill the position — and Long still chose Cutler.

Traina’s suggestions to fill Davis’ shoes in the Fox booth were the NFL Network’s Nate Burleson, former QB Kurt Warner, also of the NFL Network, ESPN’s Dan Orlovsky and Chris Long, who retired in 2018 after playing 11 seasons in the league. Kyle and Chris are extremely close, and there was no ill will whatsoever in his choice of Cutler over his brother — it was more of that fun Twitter humor he so often uses.

Long then amended his suggestion, recommending retired former Bears center Olin Kreutz as another “person who deserves an opportunity” to be a Fox NFL commentator.

the person who deserves an opportunity at @NFLonFOX is @olin_kreutz because he really knows football. His credibility in the football circle ⭕️ is unmatched. Great teacher and speaker. Seems like a no ?’er to me ??‍♂️ ?? #AmericaWouldLoveOlin

Cutler had an agreement in place with Fox to be a commentator over two years ago, but broke the deal and decided to play one more season with Adam Gase and the Miami Dolphins in 2017. He has been a reality star on his wife’s show Very Cavallari for the last few years, and Long is one of many who have found Cutler to be quite entertaining now that he has retired from football.

Davis’ replacement has not been announced yet, but few would argue Cutler would be a fun potential prospect.

READ NEXT: What Presence of Bears TE Jimmy Graham Could Mean for Trey Burton