Getty Payton Pritchard #11 of the Boston Celtics passes the ball during the fourth quarter against the Philadelphia 76ers.

The Boston Celtics looked down the barrel of a potential 1-3 start and said “not today,” roaring back from a 17-point deficit late in the third quarter on Wednesday night. Jayson Tatum headed the charge as the Celtics clawed back, staking claim to a 116-111 victory over Indiana and splitting their two opening games with the Pacers, following Sunday night’s one-point loss.

While Tatum’s game-high 27 points served as a nice redemption arch for the Celtics forward who missed the potential game-winner on Sunday, it was the play of his fellow teammate, rookie Payton Pritchard, that has stolen headlines.

The No. 26 overall pick in this year’s NBA draft, Pritchard dazzled in Boston’s comeback victory, as head coach Brad Stevens opted to ride the rookie down the stretch, leading to a season-high 27 minutes off the bench for the former Oregon standout.

Stevens’ faith in the rookie paid dividends, as Pritchard went 4-for-8 from the floor on the night, notching 10 points and adding five assists and five rebounds to the stat sheet. His crafty play has earned rave reviews throughout the NBA landscape and even more notable, some epic nicknames.

While he may just be four games into his NBA career, it’s safe to say Pritchard is well on his way to earning the respect of his fellow Celtics. Following his breakout performance on Tuesday, Pritchard’s teammate Jaylen Brown even went as far as to anoint Pritchard “the GOAT.”

“Payton is the GOAT, man,” said Brown. “Payton came in there with the confidence. (We) definitely needed a spark coming off the bench and Payton was everything and more for us.”

Speaking of GOATs, Tatum took things a step further, taking to Instagram following Boston’s second victory of the year, praising Pritchard for his performance while simultaneously likening him to arguably the greatest lyricist to ever grace a mic. 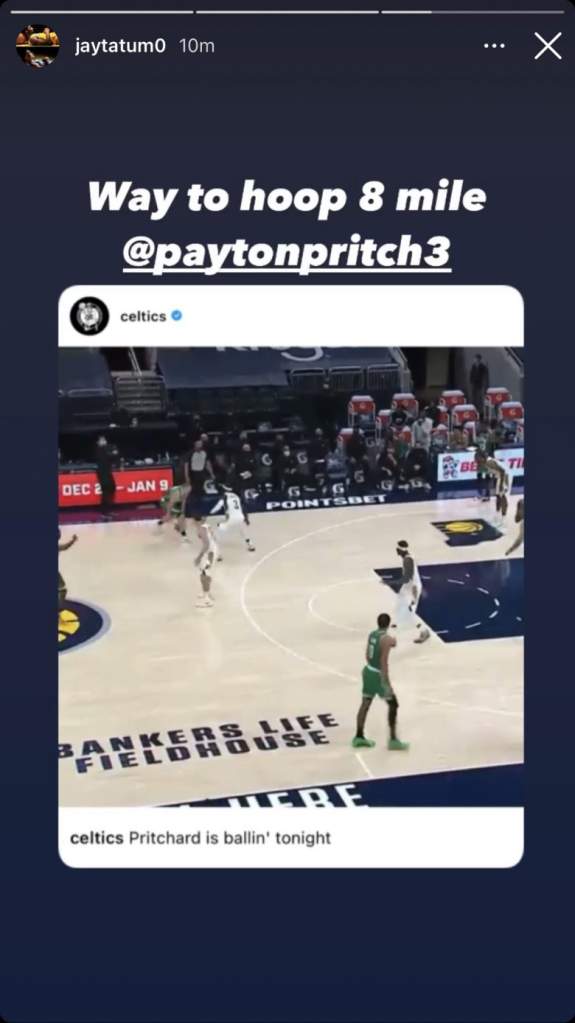 “8 Mile” is, of course, a critically acclaimed box-office success which Eminem starred in and contains real elements from his life. 8 Mile Road is a highway in Detroit that divides the suburbs in the north from the city in the south.

Boston’s two biggest stars, Brown and Tatum, weren’t the only ones to voice their appreciation for Pritchard’s play. Stevens highlighted the guard’s decision-making abilities and the veteran savvy he plays with, despite being just 22 years old.

“He makes the right play,” Stevens said of Pritchard following the victory over Indiana. “He’s deceptive, so he can get in and use his body to finish as we saw on a couple of occasions. He’s a guy that knows how to play.”

Stevens’ trust in the Tualatin, Oregon, native went a long way in building confidence for the rookie.

“Having that confidence from your coach and also from my teammates, it means the world to me because it can allow me to keep growing as a player and being able to help this team when I can,” Pritchard said. “Coming off the bench, I want to be able to provide a spark, get the team either going, or help the team build more of a lead.”

If Pritchard’s performance on Tuesday was any indication, we could likely expect his minutes to continue to trend upwards. Yet, his main focus at the moment is simple, keep winning.

“I’m all about winning. This is why we play this game. I want to win and I want to help as much as I can to get a win.”