The Brooklyn Nets have had some injuries to deal with this season as both Nic Claxton and Joe Harris, both potential starters, have missed a lot of time.

Claxton figured to be the starting center for the team, but with him missing much of the season due to an illness, players like Blake Griffin and LaMarcus Aldridge have had to step up and perhaps play bigger roles than what were asked of them initially.

There has been progress as of late on Claxton’s return to the lineup, and finally, fans have good news and it’s that he said he’s ready to go Friday night against the Minnesota Timberwolves.

#Nets center Nic Claxton says he's good to go for tonight vs. the #Timberwolves. "It's been a long few weeks. What, five, six weeks? So definitely excited." He's looking forward to catching a lob from James Harden. #NBA

Claxton’s return immediately gives the Nets some much needed size and defense, and also provides some youth. With Griffin being out of the rotation, there’s not really a ton of athleticism on the team anymore, and Griffin didn’t really provide much of it anyways at this stage in his career.

The young center said one of the first things he’s looking forward to doing is catching a lob pass from James Harden.

That will definitely be a possibility for him in the near future and it looks like his return couldn’t have come at a better time. The Nets are rolling as they hold down the top spot in the Eastern Conference.

More importantly, it seems like struggling guard James Harden might’ve found his groove. His playmaking has been good this season, but his shooting has left a lot to be desired.

Harden is coming off his best game of the season against the Knicks where he put up 34 points on 11 for 20 shooting while dishing out eight assists and securing 10 rebounds.

He’ll need to string together performances like that if the Nets want to have any shot at winning a championship this season. 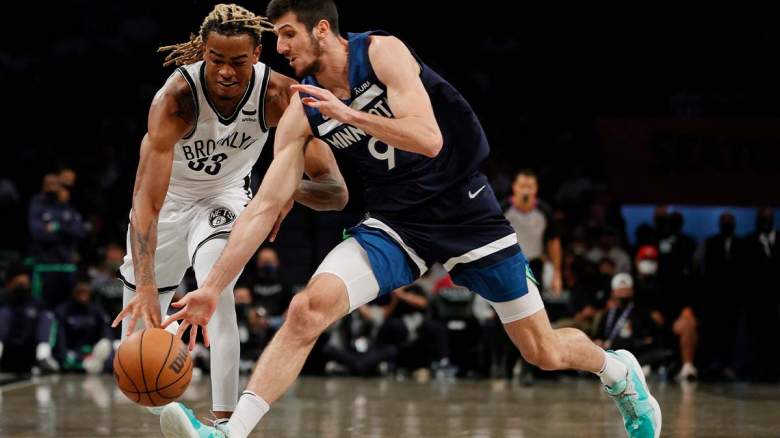 GettyNic Claxton is return to return.

Something Claxton will immediately be able to step in and provide a lot of protection around the rim and he can also catch easy lobs from Harden.

Having somebody around the rim like Claxton can help everybody out because he can not only stop the other team from scoring, but his athleticism can keep possessions alive through his offensive rebounding.

Aldridge has filled in admirably so far, but a 36-year-old center anchoring a championship team isn’t exactly desired, so he might be better suited in playing less minutes and coming off the bench. Claxton’s return will allow that to happen, but it’s not clear what head coach Steve Nash has in store at the moment.

It might be possible that he’ll be eased back into the action, so he might not play a ton against the Timberwolves. The Nets could certainly use him, but it’d be better for him to work his way back into consistent minutes than to be thrown straight to the wolves.

There’s still a lot of season left and with the Nets holding down the top spot in the conference, they can be more cautious than a team that is desperate to make up ground.

READ NEXT: NBA GM: Nets a ‘Viable Destination’ for 5-Time All-Star on Buyout