Getty Bills linebacker A.J. Klein carries the ball in the fourth quarter of the game at Highmark Stadium on December 19, 2021.

Assuming they can flee the historic snowstorm and get on a flight to Detroit on Saturday, the Buffalo Bills (6-3) will be looking to get back in the win column when they face the Cleveland Browns (3-6) at Ford Field in Week 11. In addition to dealing with inclement weather and a last-minute game location change, the Bills are also dealing with a laundry list of injuries.

In anticipation of Tremaine Edmunds being ruled out with a groin/heel injury, the Bills brought back a familiar face this week to add depth to the position, re-signing linebacker A.J. Klein one day after he was released by the Chicago Bears on Wednesday. The 31-year-old veteran was clearly pumped to return to Buffalo and sent a strong message to Bills Mafia after he was claimed off waivers.

Klein shared a photo of himself in his former Bills uniform on Instagram and wrote, “It’s good to see you again. Bills Mafia LFG!”

Bills general manager Brandon Beane said they started discussing bringing Klein back immediately following his release, per The Buffalo News. “Tremaine has missed practice a couple days here with the groin, so (Klein is) a good insurance piece. You know, he’s stepped in for us before. So another guy, another piece. We’ll see what happens from that standpoint. I don’t know that he’ll play this week, but get him back in the mix and see if he can help us out from a depth standpoint.”

Of course, the timing of Klein’s return was comically bad, as he found himself driving through a whiteout snowstorm during his first day back in Buffalo. “Perfect time to return,” Klein joked via his Instagram stories. The next morning, he posted a photo showing that his car was completely buried in snow. 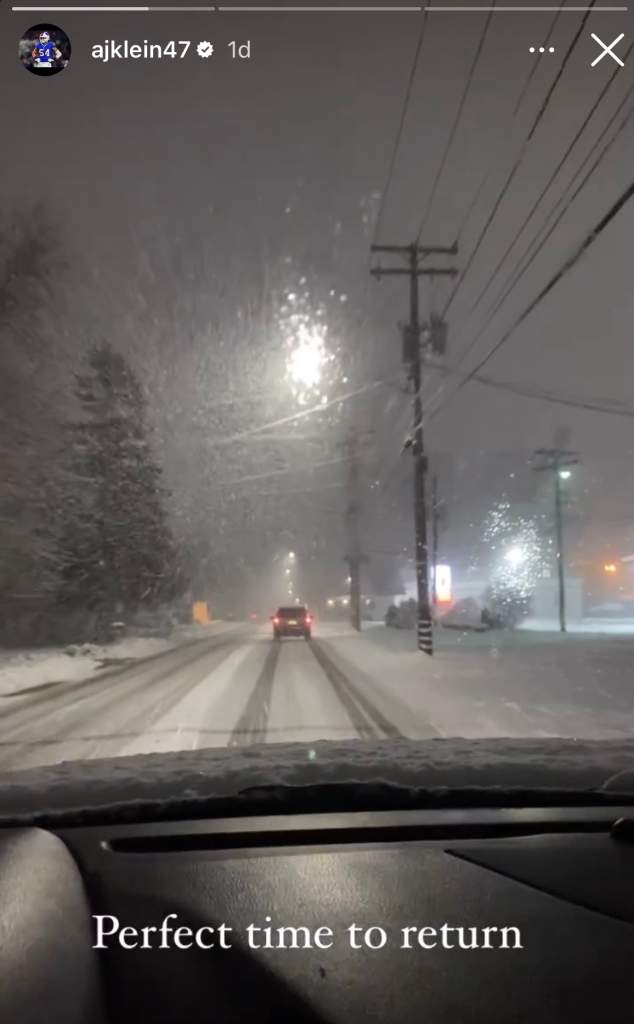 The Bills were forced to cancel practice on Friday since no one could safely make it to the training facility. Players and coaches met virtually instead. Bills head coach Sean McDermott said they were able to get “Klein into town and get materials in his hands before the weather hit,” as tweeted by One Bills Live host Chris Brown. “Haven’t seen him yet, but we’ll see how he does today & decide what his status is for Sunday.”

McDermott said on Friday, “It’s always cool when a guy that’s played for you before and the left, for his decision obviously, and then things come full circle and him wanting to come back. So, it’s great when those things happen. I think it speaks a lot about the team we have.”

By releasing Klein back in March, the Bills cleared up $5.1 million for the 2022 NFL season. At the time, Klein was entering the final year of his three-year, $18 million contract with the Bills. Over the last two seasons, the Carolina Panthers’ former fifth-round pick from the 2013 NFL Draft appeared in 31 games and made 15 starts, recording a total of 103 tackles, 5.0 sacks, and one interception.

While Klein was named the AFC Defensive Player of the Week for his performance in Week 12 of the 2020 NFL season, the Iowa State alum’s contributions on the field took a stark dip last year, during which he had only four starts, and participated in just 29% of the team’s defensive snaps, per SB Nation, his lowest number (277 defensive plays) since his rookie season.

The 6-foot-1, 240-pound linebacker initially signed onto the New York Giants practice squad on October 3, but was plucked by the Baltimore Ravens to sign with their practice squad three days later. On October 31, the Ravens traded Klein, along with a second-round and fifth-round pick to the Bears in exchange for linebacker Roquan Smith, per Pro Football Talk.

During Klein’s brief time in Chicago, he appeared in two games, participating in nine snaps on special teams and none of defense, per Bears reporter Larry Mayer. With the Ravens, he appeared in two games, recording a total of four solo tackles, per Pro Football Reference. After re-signing with the Bills, this marks the 10-year NFL veteran’s fourth team in two months.

At the start of the week, the Bills were deemed 9.5-point favorites to beat the Browns at Highmark Stadium. “The point spread moved from Bills -9.5 to -8, anticipating a low-scoring game and perhaps the run-first Browns being better equipped to play in the snow,” Yahoo! Sports analyst Frank Schwab reported on Thursday. “There were a lot of under bets on the total, which moved from 47.5 to 43 early this week.”

However, the location change has once again affected the game odds. “The Bills are now 7.5-point favorites,” Schwab wrote. “The line is lower because they’re playing on a neutral field instead of a home game. The over/under came back at 48.5. It’s even higher than the original line because the two teams will be in a dome.