Getty Christian McCaffrey #22 of the Carolina Panthers runs the ball for a touchdown during the second half in the game against the San Francisco 49ers at Bank of America Stadium on October 09, 2022.

The Buffalo Bills seem like the perfect landing spot for running back Christian McCaffrey, and it’s not difficult to see why, as the team’s run game has been their Achilles heel for years.

Financially, it makes sense, too. McCaffrey, who signed a four-year, $64 million contract with the Panthers in 2020, is only owed $1.035 million for the 2022 NFL season, and on Monday, October 17, the Bills made a roster move that cleared an easy path to add McCaffrey before the trade deadline.

Buffalo announced they were releasing linebacker Andre Smith, who was just about to return from serving a six-game suspension due to performance-enhancing drugs. As Spotrac.com previously reported, “If Buffalo decides to part ways with Smith amid the suspension, they “can free up $1.1M of cap space.”

As teams ponder a trade for Christian McCaffrey in the coming weeks, they also know this has the potential to be the richest and deepest free-agent RB class that the NFL has seen: pic.twitter.com/GRaMS0V35y

USA Today‘s Nate Davis wrote on Monday that if the Bills were to acquire McCaffrey, “It’s the nightmare scenario for the rest of the league.” While Buffalo has the No. 1 offense, they rank No. 17 in rushing.

In 2019, McCaffrey led the NFL with 403 touches, 2,392 total yards, and 19 touchdowns, during which he earned All-Pro honors. While there’s an inherent risk with McCaffrey, as he only appeared in 10 games between 2020 and 2021 due to injuries, it’s a risk Buffalo should be willing to take.

Throughout the first five games of the 2022 NFL season, McCaffrey has recorded 324 rushing yards and two rushing touchdowns along with 188 receiving yards and a touchdown reception. Against the Rams in Week 6, he added another 13 rushes for 69 yards along with seven receptions for 89 yards.

#Panthers have 212 yards of total offense.

Christian McCaffrey has 158 of them.

Back in May, NFL insider Adam Caplan reported that the Bills inquired about a trade for McCaffrey, but the Panthers said he wasn’t available. During his end-of-season press conference, Bills general manager Brandon Beane, who was the Panthers assistant GM when Carolina drafted McCaffrey as their eighth overall pick from the 2017 NFFL Draft, spoke about wanting “a RAC (run and catch guy) that you can get the ball to and he can turn a 5-yard pass into a 60-yard touchdown.”McCaffrey, if he can stay healthy, fits that bill. 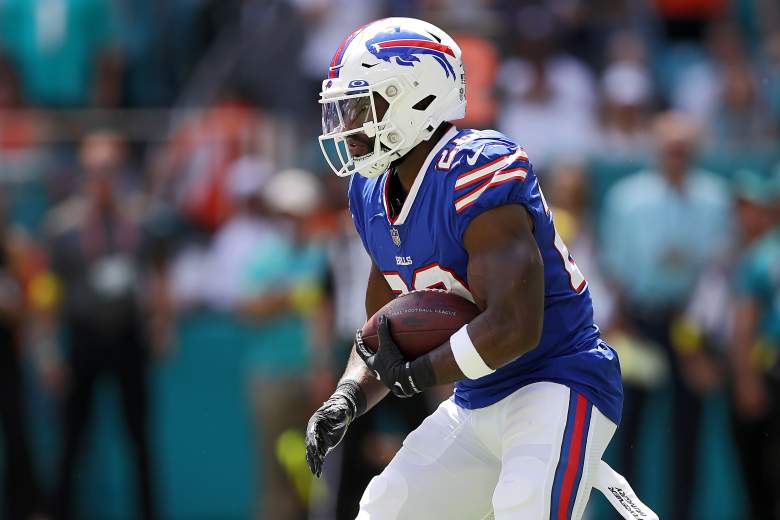 GettyZack Moss #20 of the Buffalo Bills carries the ball during the first quarter against the Miami Dolphins at Hard Rock Stadium on September 25, 2022 in Miami Gardens, Florida.

The Bills’ issue at running back was highlighted just before their marquee Week 6 matchup against the Kansas City Chiefs, as head coach Sean McDermott made running back Zack Moss a healthy scratch.

While McDermott revealed on Monday that part of the reason they sat Moss was to have “insurance at tight end with the injuries Dawson Knox has been dealing with,” as reported by ESPN‘s Alaina Getzenberg, the third-year back has struggled this season. During Buffalo’s 38-3 win over the Pittsburgh Steelers in Week 5, Moss recorded one carry for seven yards.

It was encouraging to see the team’s No. 1 running back, Devin Singletary, put up season-high numbers during Buffalo’s 24-20 victory over the Chiefs, carrying the ball 17 times for 85 yards along with four receptions for 22 yards, but rookie James Cook only carried the ball twice for eight yards. However, Cook is the only running back to score a rushing touchdown thus far this season, which came against the Steelers last Sunday.

What Would it Take for the Bills to Land McCaffrey?

CBS lead NFL Insider Jonathon Jones reported on October 15 that the Bills were one of four teams “that have shown interest” in trading for McCaffrey, however, on Sunday, Fox Sports senior writer Peter Schrager announced, “[Carolina] will listen if offers include multiple 1st-round picks,” which definitely turned some heads.

Considering the steep asking price, USA Today’s NFL analyst Jarrett Bailey suggested a trade proposal that didn’t go over well with Bills analysts. In exchange for McCaffrey, Bailed urged Buffalo to send over their second-round pick from the 2022 NFL Draft, running back James Cook, a second-round and fifth-round pick in 2023, and a fourth-rounder in 2024.

Cover 1 podcast’s account tweeted, “Waaay to much draft capital. Cook and a 4th tops. I’m not saying that’s fair, but that’ll be about the best they offer. I doubt the Bills give up a ton of assets for an RB they don’t know they can restructure and retain in 2023,” while Buffalo Rumblings’ editor responded, “This is a horrible trade lmao.”

Bailey further defended his proposal against the backlash. He tweeted, “[The Bills] have used a lot of capital on RBs- McCaffrey is two tiers better than all of them. Swallow the pride, get a game-changer, and win a Super Bowl. Renting paid off for the Rams. It can pay off for Buffalo, too.”

ESPN’s Adam Schefter reported, “If the Panthers do not receive what they feel is a real offer — with a high draft pick or multiple picks — they are adamant that they will hold on to McCaffrey past the NFL’s Nov. 1 trade deadline.”

Syracuse.com‘s Ryan Talbot suggested that the Bills could up their offer. “Buffalo’s interest could come down to how the run game fares between now and the trade deadline,” Talbot wrote.

“While the unit has had some struggles, part of the problem has been the run blocking in front of them early this season. The team’s performance in Week 5 against the Pittsburgh Steelers was encouraging, however, as the backs performed well with the offensive line creating lanes for the backs to run through.”