Getty Cornerback Dane Jackson #30 of the Buffalo Bills celebrates after recovering a fumble during the second half against the Arizona Cardinals at State Farm Stadium on November 15, 2020, in Glendale, Arizona.

The Buffalo Bills’ 41-7 victory over the Tennessee Titans on Monday Night Football was bittersweet, as with just one minute remaining before halftime, cornerback Dane Jackson took a horrific blow to the head due to an inadvertent hit from teammate Tremaine Edmunds.

Jackson collided with the Bills’ Pro Bowl linebacker while the latter was making a second-down tackle on Titans wide receiver Treylon Burks. The 25-year-old’s neck snapped back in an awkward position before he was pushed aside by Titans running back Hassan Haskins.

The sold-out crowd at Highmark Stadium was instantly silenced as an ambulance made its way onto the field. The game was paused for nearly 10 minutes while the third-year player was put on a backboard and sent to Erie Medical Center Hospital in Buffalo.

Amazing Dane Jackson had movement after this. Really hope he is okay pic.twitter.com/LiZI9o9Xed

Not knowing whether or not the Bills’ former seventh-round pick from the 2020 NFL Draft would pull hung over everyone’s hearts and minds as the game continued, and thankfully, the Bills didn’t have to wait too long for positive news. That evening, WGR 550 reporter Sal Capaccio tweeted, “Jackson is being evaluated for a neck injury at ECMC hospital in Buffalo. He will have X-rays and a CT scan. He has full movement in his extremities.”

On Tuesday, the team received even more good news and put out a statement that revealed Jackson “underwent various tests which determined there was no major injury to his neck or spinal cord. H was released from the hospital and is undergoing further evaluation today.”

A few hours later, Jackson sent out a message of his own — a great sign that he’s going to be okay. He tweeted, “All glory to God!! 🙏🏽 appreciate the love, support, and prayers from everyone. Bills mafia the best in the world! 💙.”

Jackson Walked Home from the Hosptial

From @gmfb: Great news on #Bills CB Dane Jackson. He’s home after walking out of the hospital last night following that scary scene on the field in the game against the #Titans. pic.twitter.com/YFfvxsWsGm

NFL Network’s Mike Garafolo reported on Tuesday that not only was Jackson released from the hospital but that he was able to walk home. “All indications are he has avoided a major injury,” Garafolo said. “Excellent, excellent news for Dane.”

After watching Jackson go down on Monday night, it wasn’t clear how or if he’d be able to recover. While the Bills head coach would normally be in a chipper mood following such a dominating win over a rival team, Sean McDermott was visibly somber. McDermott said during the postgame press conference, “You go from being a coach to just being a human when I’m out there watching him getting loaded into the ambulance,” he said. “That’s a real moment. Just praying for him. It’s an unfortunate situation.”

Coach McDermott: Dane Jackson has full movement in his extremities, which is good, but we are still awaiting more updates. I was able to see him in the ambulance at halftime and we are all sending our prayers to him. ❤️💙 pic.twitter.com/wU7HobqveD

Without Jackson, the Bills relied on both rookie cornerbacks, Kaiir Elam and Christian Benford, to step it up. A return timeline for the Jackson has not yet been revealed.

The Bills’ defensive line has been taking a lot of hits lately. Both Ed Oliver (ankle) and Tim Settle (calf) were inactive for the Bills game against the Titans, and defensive tackles Brandin Bryant and C.J. Brewer were elevated from the practice squad to fill the void. 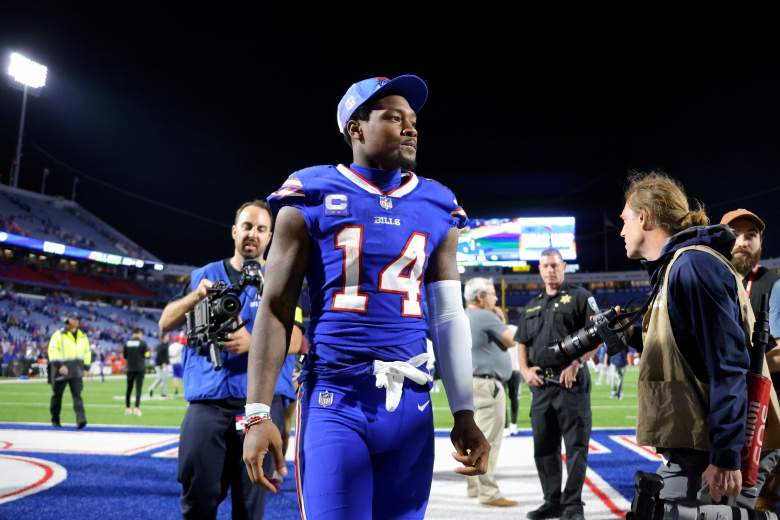 GettyStefon Diggs #14 of the Buffalo Bills walks off the field after defeating the Tennessee Titans in the game at Highmark Stadium on September 19, 2022 in Orchard Park, New York.

In an interview with Stefon Diggs on Tuesday, the Bills wide receiver, who finished against the Titans with 12 receptions for 148 yards and three touchdowns, opened up to Heavy Sports about how they were able to re-focus on the game after Jackson went down.

“We’ve heard that he’s stable right now. He’s okay. That’s something that we at least, are appreciative and thanking God for. So, you know, this team, isn’t just a team. We really are family. We really do be pulling for each other. We spend a lot of time with each other, you know, imagine there’s so many things to do in Buffalo, but we really support one another. So, to see a guy go down, it definitely is a little bit gut-wrenching.”