The Buffalo Bills (2-1) matchup against the Baltimore Ravens (2-1) is primed to be one of the most exciting games to watch in Week 4 considering viewers will see two of the most explosive quarterbacks in the NFL battle it out.

Bills star Josh Allen and Ravens leader Lamar Jackson are both having incredible starts to the 2022 season. Throughout the first three games, Allen is the league leader in combined offense with 1,127 yards, per CBS Sports‘ Jeff Kerr, while Jackson ranks third with 992 yards.

Jackson, who’s produced 87% of the total yards for the Ravens offense, is already on pace to outscore his numbers “in nearly every statistical category” from 2019, the year in which he was unanimously voted as the league MVP,” as reported by ESPN‘s Jamison Hensley. While Allen still leads with the best odds to win this year’s NFL MVP, Jackson, who’s already tallied 12 touchdown scores, has seen his odds jump from 22-1 to 7-1.

The only team with more Total TD than Lamar Jackson… is Baltimore 🤯 pic.twitter.com/AvPCm1N6zG

While speaking with Fox Baltimore reporter Rocco DiSangro on Wednesday, September 28, Allen sent a strong message to his upcoming opponent.

Allen also made a bold comment regarding Jackson’s very public contract dispute with the Ravens. While the Bills drafted Allen with their No. 7 overall pick in the 2018 NFL Draft, Jackson was drafted the same year at pick No. 32. Last year, the Bills pre-emptively locked Allen in with a monster, six-year, $258 million extension, while Jackson declined the Ravens’ recent five-year extension offer worth over $250 million, which included $133 million guaranteed, per ESPN.

Josh Allen and Lamar Jackson are the only two players with 80 Pass TD and 20 Rush TD since 2018 🤯 pic.twitter.com/6mfkZVbL4C

However, the 25-year-old Louisville alum, who represents himself in negotiations, claimed that he actually turned down closer to $160 to $180 million in guaranteed money. Jackson has created a stirring debate around the league for taking such a gamble on his career, as an unfortunate injury could quickly derail what the Ravens or any interested team could offer him in free agency.

According to Allen, however, he’s made a good bet. “He’s won an MVP, and he’s playing at an MVP level right now,” Allen told DiSangro. “Given all the drama and the details that are going on with all that contract situation that he’s got going on, he’s just like, ‘I’m gonna bet on myself,’ and I’m pretty sure it’s gonna pay off.” 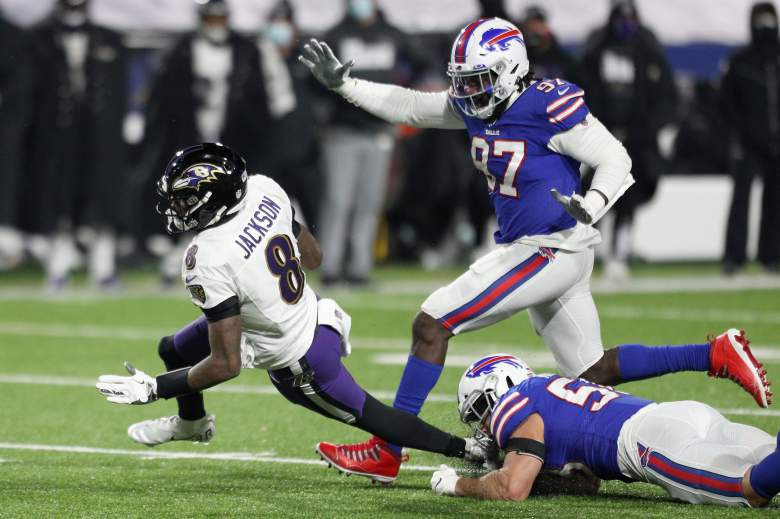 GettyLamar Jackson #8 of the Baltimore Ravens is tripped up by Matt Milano #58 of the Buffalo Bills in the third quarter during the AFC Divisional Playoff game at Bills Stadium on January 16, 2021 in Orchard Park, New York.

While Allen will do his part on offense to help the Bill get a win on Sunday, October 2, the Bills’ defense has the enormous challenge of shutting the Ravens’ dual-threat down.

“Lamar is just so dynamic as a runner and now that he’s throwing the ball as well as he is, it’s that much tougher,” Frazier said, per Bills reporter Maddy Glab. “So we’ll have our hands full trying to slow him down.”

“He’s really improved his passing,” Frazier continued. “You can tell over the last couple of years, he has gotten better at throwing the football down the field. His accuracy, and the poise he has in the pocket. He’s not looking to escape and run around at times.”

Bills head coach Sean McDermott agrees. “Jackson is a tremendous player. He’s an elite player,” McDermott said, per WGR 550 host Sal Capaccio. You have to have a total team effort (to beat him). He’s just so good in so many different areas.”

The Bills’ defense is hoping to get some of their starters back after several players were ruled out injured against the Dolphins in Week 3, including Jordan Poyer (foot), Jordan Phillips (hamstring), Dane Jackson (neck), and Ed Oliver (ankle). During the 21-19 loss in Miami, cornerback Christian Benford suffered a fractured hand and will be for several weeks after undergoing surgery.

On Tuesday night, the Bills signed three-time Pro Bowl cornerback Xavier Rhodes to the practice squad, but it’s unclear if he’ll be elevated to the active roster for Sunday’s game.

Bills superstar linebacker Von Miller also spoke out about facing Jackson ahead of their Week 4 matchup. “Nobody is like Lamar, man,” the eight-time Pro Bowler said of the Ravens quarterback, DiSangro reported. “He’s quick, he’s twitchy. Any little space that he could get he can take it the distance. He’s a blend of all different players and he can throw the ball.”

Much like Allen, Miller believes Jackson deserves to get the bag and then some. “He can do whatever it takes to win games, to put his teammates in great situations to win, and that’s why he should be the highest paid player in the NFL.”