Getty Josh Allen #17 of the Buffalo Bills throws a pass against the New York Jets at MetLife Stadium on November 06, 2022.

Just when it seemed like a foregone conclusion that the Buffalo Bills (6-2) would keep quarterback Josh Allen out against the Minnesota Vikings (7-1) after he suffered an elbow sprain against the Jets last Sunday, the franchise went in the opposite direction.

Buffalo announced on Saturday, November 12 that third-string quarterback Matt Barkley would NOT be elevated to the active roster, which meant the team is expecting Allen to suit up when the Bills host the Vikings at Highmark Stadium on Sunday. If Barkley was elevated, he would’ve been the primary backup for quarterback Case Keenum.

NFL Network’s Ian Rapoport shed light on how Buffalo came to this decision. He tweeted, “Allen is able to grip a football and he did some throwing on Friday. That gave enough confidence to proceed without elevating Matt Barkley from the practice squad and put Allen in line to play against the #Vikings despite an elbow sprain.”

Josh Allen coming out for the Vikings game. pic.twitter.com/wBZf7dWRDx

NFL analysts and fans were surprised to see the Bills seemingly gamble with their $258 million superstar. WGR 550‘s Sal Capaccio tweeted, “Really incredible turn of events this week. Didn’t think there was much chance for Josh Allen to play,” while Pro Football Doc David J. Chao saw the news and tweeted, “The hope is he can avoid another similar hit. But this is football. 🙏.” Dr. Chao warned during an appearance on Fantasy Pro‘s podcast on Thursday that it would be better if Allen didn’t play this week, “even if he can grip and throw.”

“What you can’t afford is to turn this short-term injury into a season-long or long-term injury and/or surgery. And this is why it’s better for Bills fans that he doesn’t play. This is a non-conference game… You can’t win the Super Bowl in November, but you can sure lose it in November.”

Many people slammed the Bills for being reckless with the MVP candidate. One fan tweeted, “Sounds like a stupid move by Buffalo. Risk missing the rest of the season. I’d rest him for a couple games,” while a Dolphins fan warned if Allen “gets hurt badly, then the bills get in trouble for not holding him out like we did 😬.”

While Allen only practiced once this week in a limited capacity, others assumed that Buffalo must have medical information on Allen’s injury that they haven’t shared with the public. Per ESPN, Bills head coach Sean McDermott said on Friday, “We are literally in an hour-to-hour situation here just looking at how he’s going to progress through the day. And as he goes through these different tests, medically, making sure that he’s able to check the boxes in a progression to where we can see if we can proceed through the course of the day here.”

THIS JUST IN: The x-ray image of Josh Allen’s elbow has been leaked. #BillsMafia pic.twitter.com/3q9a3bY2fS

One person tweeted, “Risking his season for a NFC team and a game with little playoff implications is confusing they must know something we don’t,” while another person wrote, “I’m choosing- perhaps foolishly… to trust that the team is treating Allen the same as everyone else when it comes to injuries. Their track record this season has been ‘when in doubt, rest.’ So I’m hopeful he’s much healthier than many have been speculating.”

Will Allen Be Playing Backup to Keenum? 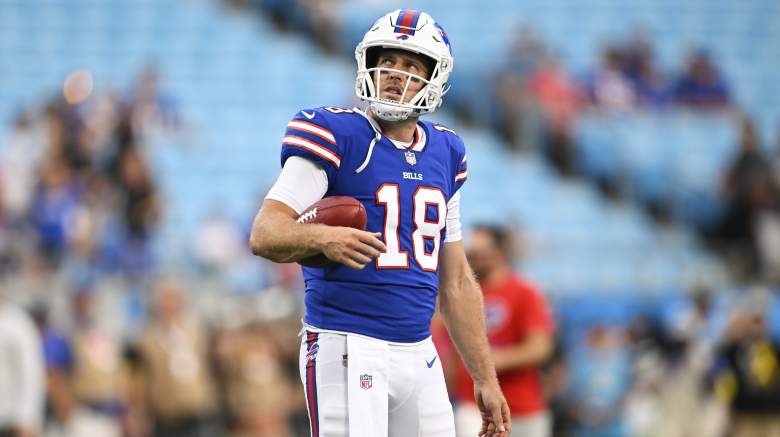 GettyCase Keenum #18 of the Buffalo Bills stands on the field before a preseason game against the Carolina Panthers at Bank of America Stadium on August 26, 2022.

Because Allen’s status remains “questionable,” analysts were split as to where this news meant he would start or not. The Buffalo News reporter Jay Skurski tweeted, “By not elevating Matt Barkley, the #Bills believe Allen is — at worst — healthy enough to back up Case Keenum. At best, of course, it means Allen is ready to play.”

ESPN‘s Alaina Getzenberg tweeted, “This is a very positive sign for Josh Allen potentially starting tomorrow. The Bills will only have Josh Allen and Case Keenum available.” However, 13WHAM‘s Dan Fetes says it’s ridiculous to think the Bills would keep Allen active only to be a benchwarmer. “If Josh Allen is ACTIVE, it’s NOT to backup,” he tweeted.

WKBW Sports director Matthew Bové tweeted, “Idk what this means about Josh Allen & whether he’ll start tomorrow, but it does give us a clue that he’s not going to miss an extended period of time. Even if he’s a backup tomorrow, the team wouldn’t put him on the field even in an emergency situation if he wasn’t healthy.”

Here is Josh Allen at the end of #Bills practice today.

No brace or sleeve seen on right elbow, but appears to be taped.

Once he notices media inside the team's fieldhouse, Allen runs off to locker room. pic.twitter.com/fsCvEO2nBk

SB Nation’s Bruce Nolan was not thrilled with the non-definitive answer on Allen’s status. Nolan tweeted, “I have never understood the ‘healthy enough to be one snap away from starting but not healthy enough to start for a quarterback and I very much hope the Bills don’t do it with Allen tomorrow. If you have a QB who is medically cleared to play and you are comfortable with a very minimal re-injury risk, play him. If you’re not, sit him.”

Allen hasn’t missed a start since his rookie season, per NFL.com, during which a missed four games to due a similar elbow injury back in 2018. Thus far this season, Allen’s thrown for 2,403 passing and 19 touchdowns, along with eight interecptions. He’s also rushed for 392 yards and an additional four scores.

While the Bills were initially favored to beat the Vikings by 9.5 points, those odds dropped to 7.5 points following Allen’s injury, and as momentum swung toward Keenum getting the start on Sunday, Buffalo was then deemed 3.5-point favorites, per Fan Duel.

After the Bills announced Allen would be active on Saturday, Fan Duel jumped the Bills’ odds to win back up to 6.5-point favorites.