Getty Mitch Trubisky #10 of the Pittsburgh Steelers looks to pass during the second half against the Cleveland Browns at FirstEnergy Stadium on September 22, 2022.

The Buffalo Bills’ upcoming matchup against the Pittsburgh Steelers was one of the big games circled when the schedule was first announced earlier this year, as it would be the first time the team played against their former beloved backup quarterback, Mitchell Trubisky.

While Trubisky was officially named the Steelers’ starter for the 2022 NFL season, it was a role the 28-year-old quarterback only held on to through four weeks. Head coach Mike Tomlin benched Trubisky at halftime during Pittsburgh’s 24-20 loss to the New York Jets on Sunday, October 2, and announced two days later that rookie Kenny Pickett would start against the Bills in Week 5.

Trubisky told reporters after getting benched that he was “disappointed, obviously, but that’s part of it,” he said.

Mitch Trubisky was disappointed to be benched pic.twitter.com/fHUpFgAAxy

When asked if he had any expectations as to what happens next, “Nope” Trubisky answered. “Just come into work, try and be a good teammate, try and be a good leader for this team and go back to work and help any way I can. It’s a tough deal. So, it’s definitely not what I wanted, not what I expected, but it’s part of it.”

While speaking to the media on Wednesday, October 5, Bills head coach Sean McDermott sent high praise and a strong message to his former backup, who stood at the ready behind quarterback Josh Allen throughout the 2021 season. “We’re better because Mitch was a Buffalo Bill last season,” McDermott said, per 13 WHAM‘s Dan Fetes. “Trubisky is ‘class.'” 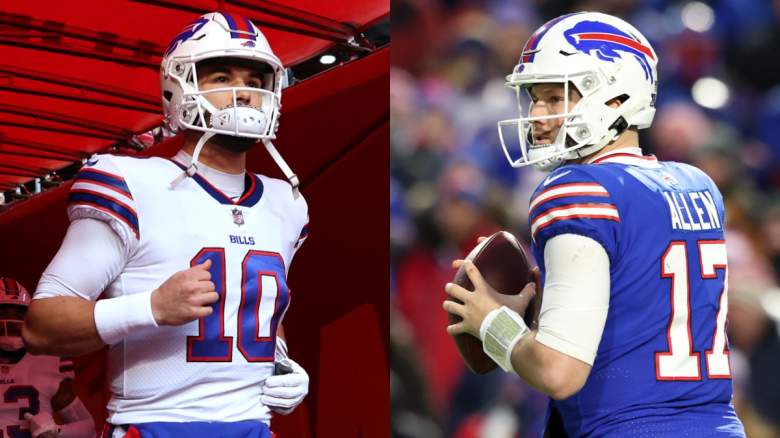 GettyBuffalo Bills quarterback Josh Allen (R) offers up his opinion on whether backup Mitchell Trubisky (L) is ready to be a starter for the 2022 NFL season.

Back in March, Bills general manager Brandon Beane famously said of Trubisky that he was a “marry your daughter” type of guy, while Allen, who continues to be close friends with his former teammate, spoke incredibly highly of his backup. “The dude is an athlete,” Allen said. “I don’t think people really understand that. You give him leeway in an offense to have that mindset of, ‘See it, do it, we trust you.’ He’s going to kill it.”

Back in March, Trubisky, a former No. 2 overall pick from the 2017 NFL Draft, signed a two-year deal with the Pittsburgh Steelers, a $14.25 million contract that “can escalate up to $27 million with various incentives,” per NBC Sports. Trubisky stood as the clear front-runner to take over for a retired Ben Roethlisberger, but that role was never guaranteed.

Though Trubisky, 27, received glowing reviews from Allen and the Bills’ coaching staff, he hadn’t started a game in over a year. Therefore, it wasn’t a huge surprise when the Steelers decided to add insurance at quarterback beyond Mason Rudolph, especially following the tragic death of Dwayne Haskins.

In the draft, the Steelers selected quarterback Kenny Pickett with their first-round draft pick, after which Tomlin said on April 28, “He’ll be given an opportunity to compete, certainly,” regarding the starting position.

Kenny Pickett says that Mitch Trubisky has been helpful, and that he’ll “lean on” Trubisky. #Steelers @937theFan pic.twitter.com/g6vUVqIYHA

After drafting Pickett with their No. 20 overall pick, the Steelers selected another quarterback, Chris Oladokun, in the seventh round. However, Oladokun was released before the season started and is now a member of the Kansas City Chiefs’ practice squad.

Tomlin explained to reporters after the Steelers loss on Sunday, October 2, why he benched Trubisky when Pittsburgh was trailing just 10-6 at halftime. “I thought we needed a spark, man. We didn’t do much in the first half, not enough offensively, and I thought [Pickett] could provide a spark for us.”

Kenny Pickett: “You guys think we’re underdogs, but we don’t”

Gotta love the confidence from the rookie. pic.twitter.com/8M7AJ3w63K

The Bills (3-1) enter Week 5 as 14-point favorites to beat the Steelers (1-3) at Highmark Stadium on Sunday. Pickett, however, is not fazed by the lopsided odds.

“You guys and everyone else thinks we’re underdogs, but we don’t,” the University of Pittsburgh alum told reporters on Wednesday. “We know how great we can be when we’re detailed and execute at a high level. So, that’s something we need to care of during the week so we can have a shot.”

Sideline reporter Missi Matthews tweeted out the following interesting fact on Wednesday: “From @NFLResearch: #Steelers rookie QB Kenny Pickett’s first start will come against the Bills #1 pass defense. The last rookie QB to beat the #1 pass defense in his first career start was Ben Roethlisberger in 2004.”