Getty Jordan Phillips #97 of the Buffalo Bills looks on prior to a preseason game against the Indianapolis Colts at Highmark Stadium on August 13, 2022 in Orchard Park, New York.

The Buffalo Bills are just five days away from facing the Los Angeles Rams in the 2022 NFL season opener and the excitement from fans on social media is palpable. However, after defensive tackle Jordan Phillips shared a uniform photo on his Instagram stories on Saturday, September 3, a lot of that enthusiasm turned into nerves.

Phillips, who returned to Buffalo this season after spending two years with the Arizona Cardinals, posted a photo of a mannequin in the locker room wearing a blue-on-blue uniform with linebacker Von Miller’s jersey number. The 6-foot-6 veteran wrote, “Game Week” and tagged the eight-time Pro Bowler.

While the Bills have not officially announced which color combo the team will wear when they visit SoFi Stadium on September 8, Phillips’ Instagram post led many people on Twitter to believe this would be the outfit.

Further fueling the rumor, the Rams have already announced that they will be wearing their “modern throwbacks” for the season opener, which consists of white jerseys and yellow pants. If the home team is wearing white, the visiting team will not.

SB Nation‘s Matt Warren did an in-depth analysis of Buffalo’s win percentage based on which color combo they wear, and as of October 27, 2021, the team won 43% of the games in which they wore blue jerseys and blue pants. Warren also noted that “the Bills tend to wear these for prominently featured matchups.”

A tweet re-posted by SB Nation on Saturday gave an updated analysis of the color combo options, which stated that heading into the 2022 NFL season, the Bills have won 50% of their games while wearing blue-on-blue.

Bills are going to rock the all blue on Thursday night 👀😤#BillsMafia #GoBills pic.twitter.com/7ftuwT1m70

While one fan tweeted, “I personally LOVE the all blue,” another person wrote, “Oh no that’s the unlucky combo.”

SB Nation’s Buffalo Rumblings’ account tweeted, “Bills loss confirmed,” while many people are not buying into the perceived “luck” of a color combo. “1-0 Baby Go Bills,” one man tweeted.

One uniform combo we know the team will not be wearing, the Bills’ April Fools’ Day “Buffalo Chicken Wing” inspired jersey.

Which of the Bills Uniforms Have the Biggest Winning Percentage?

Since 2017, the Bills have rotated through several color combinations, and percentage-wise, the red-on-red uniforms win the most. However, Buffalo plays the bulk of their games in blue jersey with white pants, which has the second highest percentage of wins.

With the belief the Bills will be wearing blue-on-blue for Thursday Night Football, one fan tweeted, “As long as it’s not white on blue, we’re ok.” 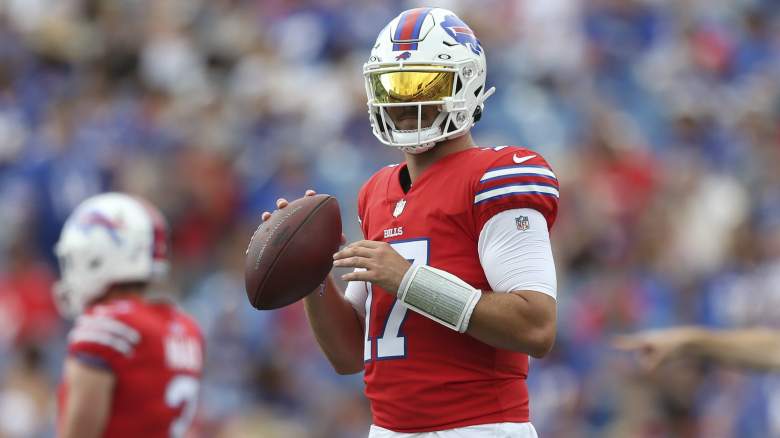 GettyJosh Allen #17 of the Buffalo Bills takes part in a drill on August 05, 2022 in Orchard Park, New York.

Bills quarterback Josh Allen, a native of Firebaugh, California, will play his first ever NFL game in his homestate in Week 1, and it will mark the team’s first matchup at SoFi Stadium.

While being the away team can be a disadvantage, the 26-year-old spoke about the pressure of playing in such a marquee matchup while appearing on his teammate, long snapper Reid Ferguson’s After the Snap podcast, which is co-hosted by Blake Ferguson, the Miami Dolphins’ long snapper.

Back in May, when Allen was asked which game he was most excited for after the NFL released the 2022 NFL schedule, there was no hesitation.

“Obviously, Game 1. Thursday night, first game of the season,” Allen said. “Ya know, I’ve heard stories of that feeling of that atmosphere… It’s like a playoff game. It’s the anticipation of the entire season. I think it can weigh on you if you let it.”

However, Allen already has a plan to make the road game feel more like a home game. Because the Bills’ season opener takes place in Los Angeles, not far from Allen’s hometown, he says there will be a flock of Buffalo fans at the game.

“It is a California game,” Allen noted. “I’ll have quite a few people from my hometown there – it’s about a three-and-a-half or four-hour drive for them. I know they’ll show up pretty good.”

Bills Mafia is already famous for their attendance at away games, and if Allen’s hometown crew is also planning to show up in Los Angeles, viewers can expect to see a large see of blue at SoFi Stadium.

READ NEXT: Bills RB Gets Married in Intimate Ceremony Before Season Opener [PHOTOS]

Loading more stories
wpDiscuz
0
0
Would love your thoughts, please comment.x
()
x
| Reply
After Jordan Phillips shared a photo on Instagram, Bills Mafia has a strong reaction to the rumored color combo the team will wear in Week 1.