Getty QB Nick Foles of the Chicago Bears seems to have a bit of a miscommunication going on -- with Brian Griese and head coach Matt Nagy.

Chris Long still considers Chicago Bears quarterback Nick Foles a friend. Long, who won Super Bowl LI with the New England Patriots before winning the big game again the following year with Foles and the Philadelphia Eagles, retired in 2019 after 11 seasons in the league. He spent three years on the same team as Foles; They were teammates with the Rams in 2015, and again in Philly, where Foles remains a bit of a folk hero for leading the team to its only Super Bowl championship.

On his podcast Green Light with Chris Long, the former defensive lineman talked about the Bears’ quarterback and his recent win over Tom Brady and the Tampa Bay Buccaneers. “That was so fun to watch,” Long said about Foles leading Chicago to a 20-19 victory. “Watching a guy I count as a buddy doing that? It’s surreal. It’s surreal seeing this guy go head to head with the GOAT in a totally different game than the Super Bowl, and coming out on top. Again.”

Long went on to share his thoughts on Foles’ mindset during football games, and be prepared — he used some NSFW language in his descriptions of his former teammate. 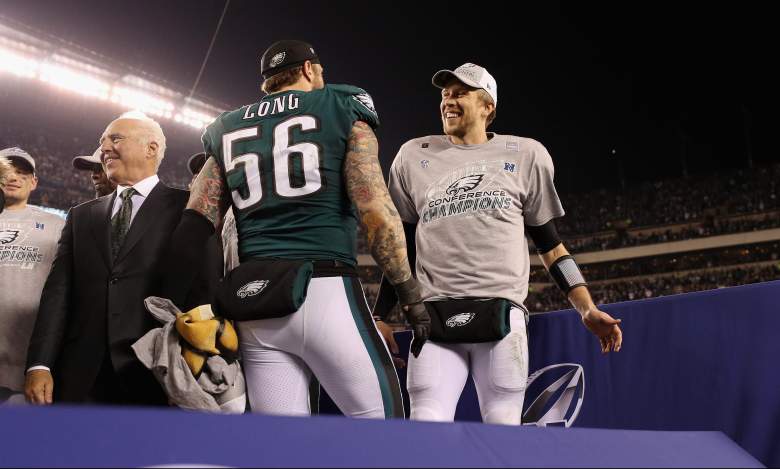 Getty Chris Long and Nick Foles won a Super Bowl together as teammates with the Philadelphia Eagles. (Photo by Patrick Smith/Getty Images)

In every game he’s played in since Matt Nagy put him in for Mitch Trubisky in the third quarter Week 3 against the Falcons, Foles has started out cold before warming up later. He has been wildly inaccurate at times, and he has missed too many throws already. But he has also shown why his decision-making alone makes him a better option than Trubisky.

Dear fans, #NFL football is so much more than physical ability.

In 13 seconds, Nick Foles won the game for the #Bears last night & proved why he is the starting quarterback! 13 seconds…. 🤯@DickersonESPN @BradBiggs #BearDown pic.twitter.com/m3qwnXxTWh

Foles has kept the Bears in games, and he has shown time and again he has the poise and leadership necessary to take the Bears on a postseason run. Long knows what Foles is capable of, because he has seen it up close, and he described his ex-teammate’s abilities in hilarious and blunt fashion: “Nick Foles is the streakiest m*therf*cker of all-time,” he said, adding:

“It’s just crazy to see a guy have ups and downs like Nick Foles. Like, the ups he has at the absolute right times. It’s pretty cool.”

Long on Foles’ Mentality: He Does Not Care About Mistakes

Noting that Foles missed several wide-open receivers in a few games now, Long said that whatever mistakes the veteran signal caller makes roll off him like water. Regardless of the situation, or how much time is left on the clock, Foles remains unfazed.

“Does Nick Foles care? F*ck no he doesn’t care. He really does not care. Like, look at his face. He does not care. It’s 13-0 with 7:00 to go, does not care. Orchestrates a drive, wakes that sh*t up,” Long said about the way Foles led the Bears to victory against Tampa Bay.

Based on Long’s description, Foles sounds like a guy who has ice water flowing through his veins — which would actually make him a pretty solid fit in the Windy City.

READ NEXT: Analysts Beg Bears to Trade for Struggling QB