Danny Trevathan and Eddie Jackson have had enough. The Chicago Bears All-Pro safety, in particular, is fed up with his perfectly good pick-sixes getting called back for questionable penalties, thank you very much.

Early in the third quarter of the Bears’ 23-16 win over the Carolina Panthers Sunday, Jackson picked off a Teddy Bridgewater pass and returned it for a 17-yard touchdown. The Bears were up 13-6 at the time, and it would have made it 19-6 (20-6 if Cairo Santos hits the extra point). The play didn’t stand, however, and was called back after cornerback Kyle Fuller was flagged for unnecessary roughness — on a hit that looked beyond clean and legal.

It was the second straight week Fuller was flagged for such a play; He was also penalized in Week 5 for an eerily similar hit against the Bucs, but the officials gathered to discuss it and reversed the call, correctly surmising it was a clean hit. Fuller and the Bears didn’t get the benefit of the correct call in this one, however, and multiple Bears — particularly Danny Trevathan and Eddie Jackson — took umbrage with it.

Another week, another game where @BoJack39 is robbed of a touchdown. Where’s the consistency in the officiating? Top video wasn’t called a penalty against Panthers’ defensive back, bottom video they call a penalty against Kyle Fuller. pic.twitter.com/ivYSGqqS4g 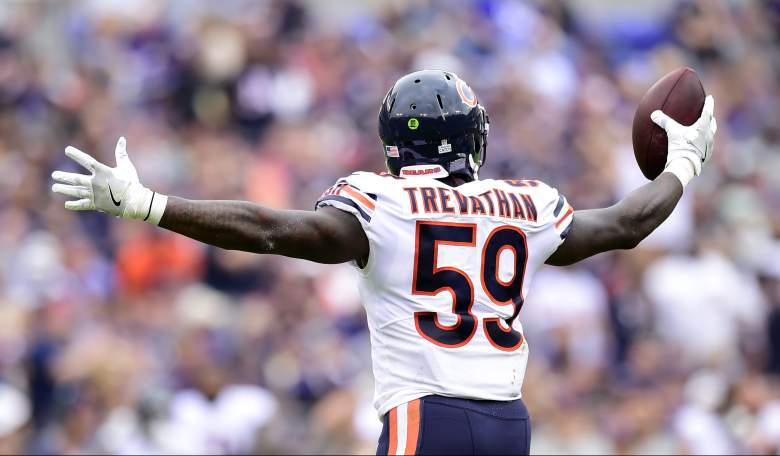 The Bears’ defense forced three turnovers in their win against the Panthers, but the bad call on Fuller took away a fourth — and it wiped another defensive score away. After the game was over, starting linebacker Danny Trevathan took to Twitter with a bit of an unconventional suggestion: The league should begin fining referees for making “ludicrous” bad calls.

We need to start fining Refs. This is ludicrous on me.😤

Bears’ starting linebacker Roquan Smith was diplomatic when asked about the reversed pick-six after the game: “When he’s in there, he’s making a play on the ball. It sucks that the penalty is called, but if they call it we just have to go to the next play,” Smith said about Fuller and the penalty, specifically.

Head coach Matt Nagy also weighed in Monday, and while he wasn’t critical of the officials in any way, he did sympathize with Fuller. “He was just playing football,” Nagy told the media, also noting he and the All-Pro cornerback had a laugh on the plane ride home about the play.

Matt Nagy on the penalty called on Kyle Fuller's shoulder-to-shoulder hit: "There's nothing he can do in his position. He's just playing football."

Bears HC Matt Nagy said he and Kyle Fuller were joking around on the plane ride home about his "illegal" hit. "There's literally nothing you can do in his position. The referees have a tough job."

For his part, Jackson may be a little salty because this was the second pick-six he ran back this season that was called back due to questionable officiating. He also ran one back 54-yards for a score against the Giants Week 2, but was flagged for pass interference instead.

After the Bears secured the win against Carolina and moved to 5-1, Jackson took to Twitter, saying the officiating made “no sense” to him, while also reminding everyone how ridiculous his stat line would be had the flags not been thrown.

While Jackson didn’t blast the refs, per se, her certainly let the world know he felt robbed by them, and he’s not alone in his thinking. Twitter lost its collective mind when the play was called back Sunday, but Jackson will most definitely get other chances. Ball hawks gotta ball hawk, after all.

Kyle Fuller literally could not have played that better

Pereira has no clue what he’s talking about

Every week, Kyle Fuller makes a legal hit that somehow scares officials into throwing a flag.

Another total BS call on Kyle Fuller !! It was all shoulder to shoulder! How are you supposed to play the game when you do it right and still get flagged!

Loading more stories
wpDiscuz
0
0
Would love your thoughts, please comment.x
()
x
| Reply
Multiple Bears are NOT happy with the glaring inconsistencies they see from officials, and they are calling it out in a big way.