Getty Former Bears and Packers TE Martellus Bennett went off on the Packers this weekend.

Former Chicago Bears tight end Martellus Bennett spent three seasons in the Windy City, playing for the Bears from 2013-15. He had his career-best season with the Bears in 2014, when he caught 90 passes for 916 yards and six touchdowns, making the Pro Bowl.

He finished his career with the Green Bay Packers and the New England Patriots, playing in New England during the 2016 season. The Packers signed him to a three-year, $21 million contract the following year, but he wound up only playing seven games for the Green and Gold. The Packers waived Bennett in November 2017 with a failure to disclose a medical condition designation, and the Patriots immediately claimed him off waivers. He finished his career in New England and retired after his 2017 campaign.

The former tight end, who also played for the New York Giants and Dallas Cowboys, recently took the time to share some revealing things about his brief time in Green Bay via Twitter — and he named names while dropping some pretty big bombshells. 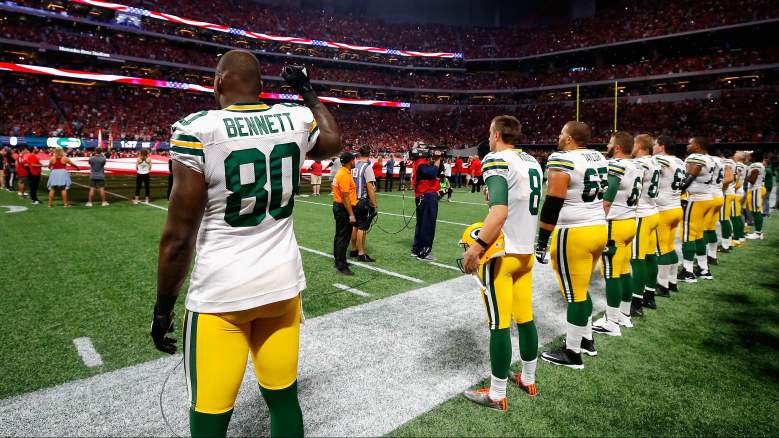 GettyEx-Packers TE Martellus Bennett raises his fist during the national anthem prior to the game between the Green Bay Packers and the Atlanta Falcons at Mercedes-Benz Stadium on September 17, 2017 in Atlanta, Georgia. (Photo by Kevin C. Cox/Getty Images)

Bennett, who was one of the NFL players who protested systemic racism and police brutality during the 2017 season, shared some eye-opening details about how his protests and the discourse surrounding them were received by the Packers organization, players and fans in an October 23 Twitter thread.

“They had a players meeting in which the GM etc met with me (ex-Packers WR) Jordy Nelson, (kicker Mason) Crosby (quarterback) Aaron (Rodgers),” Bennett tweeted, adding: “I didn’t agree with those guys about their ideas for protest. It was some corny ass s***.”

The retired TE then revealed he was the recipient of death threats from fans and a “smear campaign” from the team:

“Packers fans were sending hate mail and leaving death threats and other hateful messages on the team voicemail because I was protesting,” Bennett tweeted. “It got so bad that Doug Collins the head of team security was worried something might happen to me in Wisconsin. Ask Doug Collins. Head of Packers security. Don’t believe the smear campaign the packers (sic) organized when they cut me.”

Ask Doug Collins. Head of Packers security. Don't believe the smear campaign the packers organized when they cut me

Bennett: Packers Didn’t Like Influence I Had Over Other Players

The former Bears TE also said the team forced him out of Green Bay specifically because of his protesting. “The entire situation to get me out of Green Bay was tied to protesting and the organization plotted to find a way to cut me and came up with some bull****” Bennett tweeted.

Bennett added that certain members of the Packers’ organization didn’t like the influence he had over some of the team’s black players, citing Kevin King as an example.

“The influence I had over the young black players … when it came to protesting and speaking out was an issue the packers (sic) weren’t prepared for,” Bennett added. “I told the young guys they didn’t need to protest. I had a long heart to heart with Kevin king (sic) because he was nervous. And scared of what the team may do to him. He decided to join me at the very last moment before the national anthem.”

And scared of what the team may do to him. He decided to join me at the very last moment before the national anthem.

Bennett also seemed to suggest that there was some malfeasance happening within the Packers organization, and in light of the recent Jon Gruden scandal, says he wouldn’t mind seeing some emails from the team during that time:

I would love to see the packers organizations emails and communications pertaining to my situation on that team.

“The Packers know what they did,” he added.

Nelson, Crosby, Rodgers, King or the Packers organization have yet to reply to Bennett’s Twitter thread.

Loading more stories
wpDiscuz
0
0
Would love your thoughts, please comment.x
()
x
| Reply
The former NFL tight end wouldn't mind if emails and communications during his time with the Packers were made known.