After starting the season at 5-1, the Chicago Bears have lost four straight, watching their once promising playoff hopes get smaller with each consecutive loss. After benching fourth-year quarterback Mitch Trubisky Week 3 in favor of veteran Nick Foles, the Bears have seen zero positive changes in the offense — if anything, Chicago looks more inept than ever on that side of the ball.

At present, both Foles and Trubisky are dealing with various ailments that don’t appear to be serious (Trubisky has shoulder soreness while Foles injured his glute/hip area against the Minnesota Vikings), and when Bears head coach Matt Nagy spoke to the media Tuesday following his team’s 19-13 loss to the Vikings Monday night, he was asked whether he would consider switching back to Trubisky whether Foles was healthy or not. Spoiler alert: We could be seeing more of Mitch in the future.

Matt Nagy is Open to Switching Back to Mitch Trubisky

While he wouldn’t definitively say either way, Nagy absolutely left the door open for a Trubisky return.

“They’re both a little banged up, so that’s the No. 1 thing that we have to look at,” Nagy said. “In complete honesty, we’ll take this bye week here and we will self-scout ourselves, and we will see the ‘wheres’ and the ‘whys.’ And whatever we need to do, we will do in a lot of different areas. So, I can’t say one way or the other on anything, other than when you lose four games in a row, it’s all on the table. Everything’s out there.”

Nagy and the rest of the Bears’ coaches will take the next 13 days before their next game Week 12 against the Packers to determine whether or not a move back to Mitch is the way to go. Based on the current climate in Chicago, however, it’s looking more and more like it could be Trubisky Time again soon. 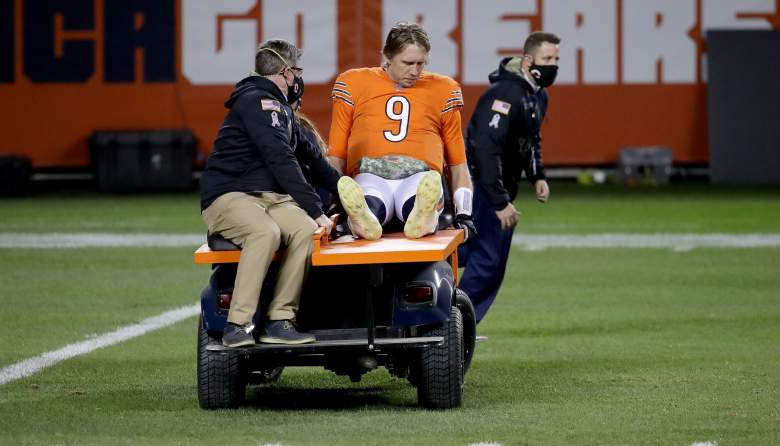 GettyQB Nick Foles of the Chicago Bears was carted off of the field after being hit by Ifeadi Odenigbo #95 of the Minnesota Vikings during the fourth quarter of the game at Soldier Field on November 16, 2020 in Chicago, Illinois. (Photo by Jonathan Daniel/Getty Images)

Nagy told the media Tuesday morning Foles’ injury was better than the team had initially thought, and that the veteran signal-caller will likely avoid going on injured reserve. He was also optimistic about Trubisky’s return, although he didn’t get specific.

Loading more stories
wpDiscuz
0
0
Would love your thoughts, please comment.x
()
x
| Reply
Matt Nagy seems open to anything at this point -- including another huge change.