Getty Mitchell Trubisky #10 of the Buffalo Bills participates in warm-ups before a preseason game against the Chicago Bears at Soldier Field.

That’s what ESPN insider Jeremy Fowler wrote in his February 22 column, also noting 2022 was gearing up to be a “reset” of sorts for the 27-year-old QB. The former second overall pick spent one season under John Fox and three under Matt Nagy — both of whom are no longer employed by the Bears — and according to Fowler, “the Chicago experience left Trubisky hardened.”

Trubisky, who spent the 2021 season backing up Buffalo Bills QB Josh Allen, appeared in just six games last year, completing six of eight passes for 43 yards, no touchdowns and an interception. He also added 24 yards and a score on the ground. After a year under former Bills offensive coordinator (and current New York Giants head coach) Brian Daboll, Fowler says multiple NFL executives think the former Bears starter is ready to lead another team in 2022.

Fowler: Trubisky Will Have ‘Real Opportunity’ to Start in 2022, Linked to 3 NFC Teams

“Teams are open to the notion that Trubisky’s story as a productive NFL quarterback — he is 29-21 as a starter — is not complete,” Fowler wrote, adding: “A few NFL execs told me his traits and pedigree should result in a real opportunity. The Commanders, Panthers and Giants (reuniting him with former Bills offensive coordinator Brian Daboll as competition for Daniel Jones) are among spots that could work.”

A report by The Athletic after the 2021 season detailed the up and down relationship between Nagy and Trubisky, with Nagy’s inability to develop young QBs a primary focus. It seems there are several top minds in the NFL who think Trubisky could still be a capable starter, with a few suggesting Nagy may have held Trubisky back.

“I could see him going to a situation where he can be a starting option and the team drafts a quarterback,” an AFC exec told Fowler. “He’ll have to go out there and earn it, but there’s certainly enough there where the right offense can accommodate him. The offense in Chicago was pretty rigid and on-script, and I’m not sure it suited him.” 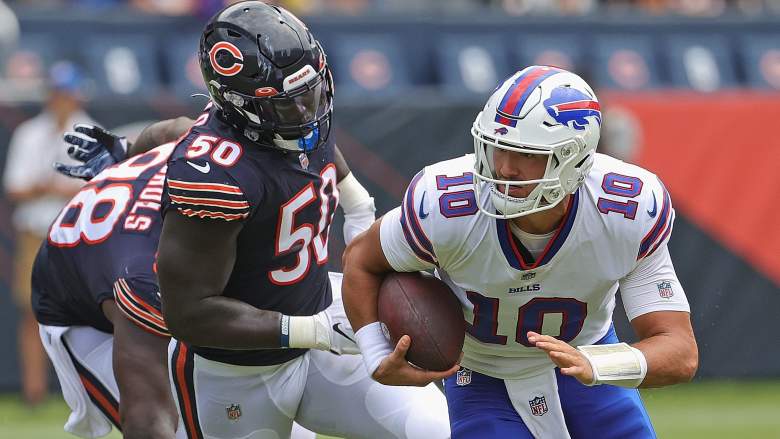 GettyMitchell Trubisky completed 20 of 28 passes for 221 yards and a touchdown against the Bears in a preseason victory for Buffalo in 2021.

Trubisky started 50 games for the Bears before becoming Allen’s backup last season, and he says he learned a great deal during his stint in Buffalo.

“I’m in a confident space right now,” Trubisky told Fowler. “Going to Buffalo really opened my eyes,” Trubisky added. “After being in Chicago for four years, there was only one way I knew how to do things. [Being] in Buffalo and [having] a different way of doing things, you learn what’s possible. It helped me get back to instinctual football and using my talents rather than overthinking.”

Chicago faces both the Commanders and the Giants in 2022, so if Trubisky lands in New York or Washington, he’ll be seeing the Bears during the regular season for the first time.

Either way, it seems Trubisky’s will get an opportunity to lead again. We’ll see what he does with it.

Considering the weakness of both this year’s incoming rookie QBs and free agent QB class, Mitch Trubisky is going to have a robust market. Lots of QB openings & potential openings, too.https://t.co/2qGXFHLmu5

Loading more stories
wpDiscuz
0
0
Would love your thoughts, please comment.x
()
x
| Reply
The Bears could be seeing a lot more of Mitch Trubisky in the near future.