Getty LB Manti Te'o will get another chance in Chicago.

Just moments after the Chicago Bears saw the Los Angeles Rams poach kicker Kai Forbath off their practice squad, the team announced they have also added someone new. The Bears have signed former Chargers and Saints linebacker Manti Te’o to their 16-player practice squad, per their official Twitter account.

We have signed LB Manti Te'o to our practice squad.@Hyundai | #DaBears

Te’o played seven seasons, spending his first four with the Chargers before heading to New Orleans for three years. One of the top linebackers in the 2013 NFL Draft, Te’o was drafted in the second round (38th overall) by the then-San Diego Chargers. He had yet to catch on with anyone so far this season until now, where he’ll get another shot in Chicago.

Te’o was an extremely coveted prospect coming out of Notre Dame. He got a phone call from Bears legend Dick Butkus back in 2012, when he won two of the top awards in the country: He won the Butkus Award for being the top linebacker in college football, and he also won the Bronko Nagurski Award, which is given to the top defender in the nation.

The Chargers snatched him up at No. 38 in the draft in 2013, and he had a solid rookie season, starting 13 games and netting 61 tackles, six tackles for loss and four passes defensed.

Foot injuries began to pop up in his first two seasons, however, and he saw a promising career derailed by a slew of injuries that began to pile up over the years. He tore his Achilles three games into his 2016 campaign, which ended his season. He managed to come back and play in all 16 games the following year, his first with the Saints, but he has only started four games since the 2017 season. He was a healthy scratch for the Saints for much of the 2018 and 2019 seasons.

While he was a beast in the backfield during his Notre Dame days, Te’o didn’t quite fulfill his potential in the NFL. He had 8.5 sacks in his four seasons in college, but only 1.5 in his seven-year career.

Could Te’o See the Field for the Bears This Year? 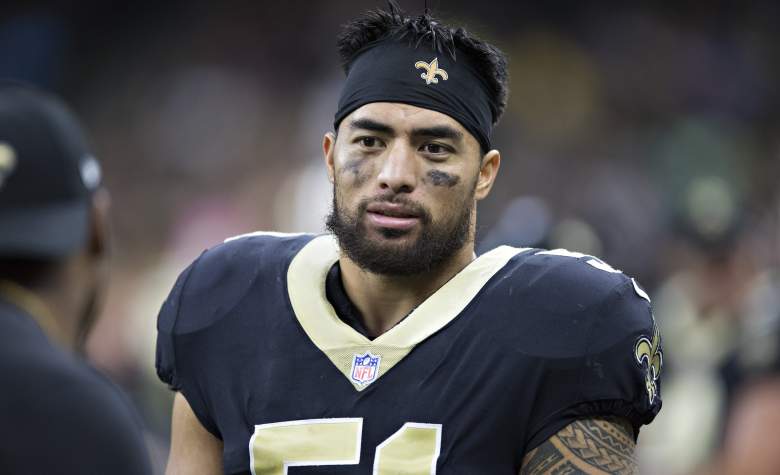 GettyLB Manti Te’o was one of the top defensive prospects in the nation when he played college ball at Notre Dame. Injuries derailed his pro career. (Photo by Wesley Hitt/Getty Images)

Te’o is an athletic vet who will likely only get called up if the injury bug bites the Bears’ linebacking corps. Still, there’s a chance they may add him if depth is needed at some point. Te’o was always solid when it came to running sideline to sideline, and he has always been good at determining where the ball carrier is going and getting to him.

The Bears have been stout on defense, but they haven’t done their best work stopping the run this year, and that’s something Teo has always done well. While it’s unlikely he will make an immediate impact, the 29-year old Te’o could very well replace one of the younger linebackers (see: Josh Woods or Joel Iyiegbuniwe) at some point this season. At the very least, he’ll be provide a solid veteran presence for the younger players to learn from.

Loading more stories
The Bears have added an intriguing name to their practice squad.