While most of the internet took the opportunity to dump on Beckham about the unfounded gossip, Clay Travis of Outkick.com was quick to fire a ricochet shot at Browns quarterback Baker Mafyield.

“Worth pointing out that if Odell Beckham does indeed like to be pooped on, that there is no better quarterback he could be playing for than Baker Mayfield,” Travis said.

"Worth pointing out that if Odell Beckham does indeed like to be pooped on, that there is no better quarterback he could be playing for than Baker Mayfield." –@ClayTravis pic.twitter.com/bq9xyuGist

After gaining some MVP hype in the preseason following a record-setting rookie year, Mayfield finished his second season in the NFL with 3,827 yards, 22 touchdowns and 21 interceptions. He finished next-to-last in both passer rating (78.8) and completion percentage (59.4%).

Despite breaking the 1,000-yard barrier last season, Beckham did not live up to the wild expectations set for him. He finished his first season in Cleveland with 1,035 yards and four touchdowns, playing from behind from the get-go due to injuries that limited his chemistry with Mayfield.

But after having surgery and getting healthy in the offseason, Beckham is ready to roll into what he has predicted will be the most productive year of his career.

“I feel like, in my past life, I tended to dwell on the negative,” Beckham told reporters during training camp. “Now I’m trying to look at the positives. I’m just letting you know that 2020 is going to be completely different. I don’t care who has doubts, or what thoughts or opinions are made about me as a player or person. It’s going to be my year.” 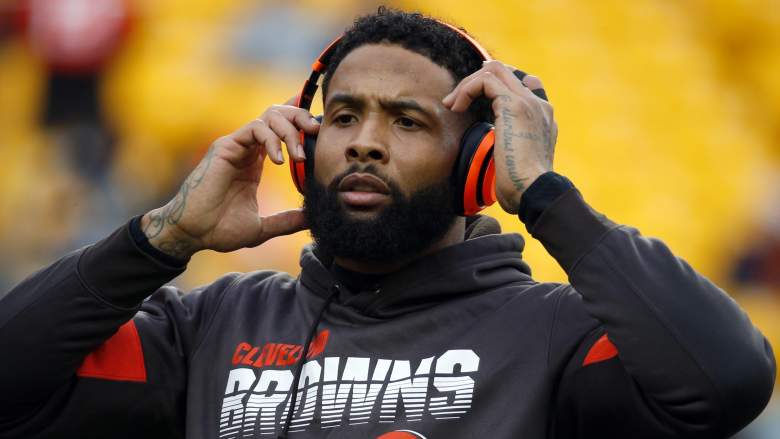 While Beckham didn’t come outright and address the rumors, he did put up a post that appeared to be in response.

“Can’t knock me off my pivot… no matter what shxts thrown my way,” Beckham wrote with a crying laughing emjoi. The post was crowded with comments from fellow NFLers and even his girlfriend, Lauren Wood, who appeared to be taking the situation in stride with a comical response.

Browns defensive end Myles Garrett had his own fun with the trending topic of conversation on Tuesday.

“‘MG, it’s good for the skin bro. Hydration, exfoliation all that shxt,'” Garrett wrote on a photo of him and Beckham together. “Word? You can miss me with that O. #issajoke”

“MG, it’s good for the skin bro. Hydration, exfoliation all that shxt” Word? You can miss me with that O🤣 #issajoke

Some High on Baker Mayfield Heading Into Third Season

While it’s easy to poke fun at Mayfield after his down year, there are some who are not giving up on the former No. 1 overall pick just yet.

Peter Schrager of Good Morning Football believes Mayfield will insert himself in the conversation of great young quarterbacks in the NFL, like Lamar Jackson, Patrick Mahomes and others.

Baker Mayfield will get right back into the conversation for best young QBs this season.

“I’m getting on the bandwagon. I believe in Baker,” Schrager said. “I think last year things got out of control early and the head coach wasn’t prepared to handle things as they got out of control with the hype, expectations and the issues on the field. I think he’s in the great young quarterback conversation by the end of the year.”

Mayfield, Beckham and the Browns open their season on Sunday against the Baltimore Ravens.

Loading more stories
wpDiscuz
0
0
Would love your thoughts, please comment.x
()
x
| Reply
While most of the internet was dumping on Cleveland Browns star Odell Beckham Jr. on Tuesday, one analyst used the situation to take a shot at Baker Mayfield.