Odell Beckham Jr. did not mince words when asked about the Cleveland Browns blowout Week 1 loss to the Baltimore Ravens.

“They were the better team. They beat the s— out of us,” Beckham told reporters on Tuesday while reflecting on the Browns 38-6 loss. “Toss it up as a mulligan.”

#Browns Odell Beckham Jr. said even though the Ravens "beat the sh*t" out of them, they have to chalk it up to a mulligan and focus on the next 15 games.

Beckham drew a team-high 10 targets in the loss, but managed just three catches for 22 yards. He also had a critical drop and was called for a face mask penalty that negated a solid gain. The Browns don’t have time to dwell with their miscues. Cleveland faces Cincinnati and No. 1 overall pick Joe Burrow on Thursday Night Football. 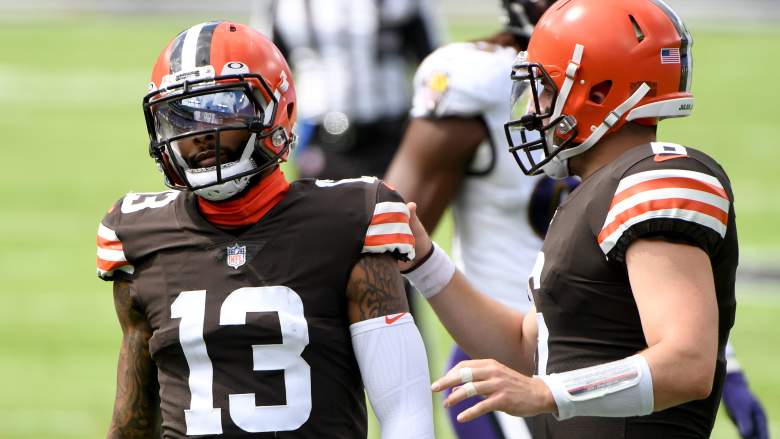 Beckham has had a hard time getting on the same page with quarterback Baker mayfield, which has been a theme during his tenure in Cleveland. Beckham was banged up last season, which severely limited his practice time despite not missing a game, but time is running out for the duo.

“I think it has to come naturally. … I think we had some great 1-on-1 opportunities Sunday, just didn’t connect. We’re working on that. We’ll get it fixed,” Mayfield said, via Keith Britton of 92.3 The Fan.

#Browns QB Baker Mayfield on balancing wanting vs needing to get the ball to Odell: "I think it has to come naturally."

Beckham chocked it up to needing more live action on the field. “Sunday wasn’t what we wanted, but more game reps will be the way to go,” Beckham told reporters.

#Browns WR Odell Beckham Jr. on getting on same page with Baker Mayfield: Sunday wasn't what we wanted, but more game reps will be the way to go

Browns head coach Kevin Stefanski, who calls the offensive plays, is determined to find a solution.

“We didn’t connect a few times out there,” Stefanski said on Monday. “We have to get to the bottom of it, obviously. Pass game requires precision from 11 guys in order for it to go.

When things aren’t going right on the field, you can usually tell by Beckham’s bad body language, which he has been criticized for during games. When asked about it, Beckham said it’s just part of being OBJ.

“That’s just the way my life’s gone,” Beckham said. “You have to watch everything you do. If you don’t have the same reaction someone may like, you may have a headline written about you. The spotlight’s going to be on me, right, wrong or indifferent.”

#Browns WR Odell Beckham Jr. on body language "That's just the way my life's gone. You have to watch everything you do. If you don't have the same reaction someone may like, you may have a headline written about you. The spotlight's going to be on me, right, wrong or indifferent"

Beckham had said that 2020 would be his year and predicted that he’d put up his best numbers yet. During his media session on Tuesday Beckham made sure to clarify his goals.

“I want the world and everyone to understand that I care about one thing and that’s winning and producing,” Beckham said.

#Browns @obj about the 1 thing he cares about. He named 2 things.

"I care about one thing and that's winning and producing." pic.twitter.com/Adr88AZixz

The Browns face the Bengals on Thursday and are 6-point favorites for the matchup. The AFC North opponents split their two games last season.

Loading more stories
Odell Beckham Jr. did not mince words when asked about the Cleveland Browns blowout Week 1 loss to the Baltimore Ravens.