It’s not a stretch to say that few people in Dub Nation are living as well as Golden State Warriors star Klay Thompson. After spending two-plus years away from the game to rehab a pair of major injuries, the sharpshooter somehow returned to secure his fourth championship ring as a key cog and a 20-point scorer.

Thompson continues to live his best life as summer barrels toward fall, too, and he’s chronicled his exploits every step of the way.

On Friday, the five-time All-Star reemerged on Instagram in full Captain Klay mode — sans his signature captain’s hat — gyrating and dancing aboard his boat to the tune of Shouse’s 2017 hit “Love Tonight.” Not only that, Thompson propelled himself into the water with an epic dive, apparently as his boys Leandro Barbosa and Nemanja Bjelica looked on.

While the original video is no longer available, the folks over at NBC Sports Bay Area made sure to capture the frivolity for posterity, as seen embedded below.

Thompson Has Been Living It Up

When on the court and healthy, few (if any) ballers across the Association have the ability to get as white hot as Thompson. However, the same could be said for his wild’n out away from the hardwood, and he has been in rare form in the weeks/months following Golden State’s title victory.

In no particular order, Thompson has been snapped trucking parade goers at the Dubs’ championship celebration, downing brews and leading the cheers as bro Trayce Thompson comes up with clutch hits for the LA Dodgers and leaving his mark as an NBA champ on Bahamian beaches.

Fans continue to eat it up, too, commenting on his latest display in droves.

“Hey man Klay is young rich and a champion,” tweeted one supporter. “Live ur life my guy!!”

“Watching you gives me so much joy vicariously! You’ve been to hell and back, twice… so it’s all gravy now!” wrote another fan. “You deserve every morsel of goodness this planet has to offer! Enjoy your boat and the water, Splash Bro!”

Others were less enthusiastic about his antics, though, with one tweeter writing, “He has always been the goofiest dude in the NBA. Talent, but zero swag.”

It Hasn’t Been All Fun & Games, Though

Regardless of how one feels about Thompson’s summer flair, it’s worth noting that it hasn’t been all fun and games for the baller this offseason. With his injuries finally behind him, Steph’s Splash Bro has endeavored to ramp up his workout routine in an effort to come back bigger and better than ever in 2022-23.

Ahead of the NBA Finals, Klay’s trainer, Ben Bruno, revealed via IG that the Warriors star had designs on kicking his workout routine up multiple notches. The performance specialist posted a  screenshot of Thompson’s text message to him declaring as much prior to the championship series.

“Hey man. I rented a spot in Beverly Hills from mid-July to mid-September,” the Warriors wing texted. “Now that I’m back healthy we gotta get on a good workout schedule for the summer again like it’s 2018.” 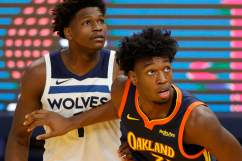