Getty Milwaukee Bucks wing Donte DiVincenzo warms up before a 2021 bout with the Orlando Magic.

The free agency period hasn’t exactly been a flurry of activity for the Golden State Warriors in terms of adding players. More than anything, it has been defined by key members of their latest championship squad getting raises to play elsewhere.

Like Otto Porter with the Toronto Raptors and Gary Payton II with the Portland Trail Blazers.

That’s not to say, though, that team president Bob Myers and his brain trust haven’t been active. The Dubs were able to secure the return of their top in-house free agent in Kevon Looney, in addition to adding prospects Patrick Baldwin Jr, Lester Quiñones and Ryan Rollins. And they’re not the only ones joining the program, either.

Per a release from the Warriors on Friday, free agent guard Donte DiVincenzo‘s contract is finally on the books. In accordance with team policy, the exact terms of the agreement were not released.

DiVincenzo’s signing was first reported by The Athletic’s Shams Charania late on July 1. After spending the final third of the 2021-22 campaign with the rival Sacramento Kings,  the 25-year-old is coming to the Bay Area on a two-year pact that will pay him $9.3 million, according to Charania.

The league insider further reported that DiVincenzo has a player option for the second year.

A two-time NCAA champion (2016 and 2018) and one-time NCAA Final Four MOP (’16), the 6-foot-4 DiVincenzo was originally a first-round pick of the Milwaukee Bucks, with whom he spent parts of fours seasons. Alas, the promising baller suffered a torn ligament in his left ankle during the 2021 NBA Playoffs, which caused him to miss a significant portion of the Bucks’ title run.

Before getting dealt to Sacto at the trade deadline, the end of his run in Milwaukee was largely spent trying to get back onto the court and into the swing of things.

Draymond Is Over the Moon About the Signing

For his part, Warriors star Draymond Green made no bones about the fact that getting DiVincenzo to the Bay was a top priority; not only for Golden State’s front office but for himself and reigning Finals MVP Stephen Curry as well.

“Steph and I definitely put the full-court press on Donte, and understanding how important that addition is. With losing [Payton], you add another wing who can defend,” Green said on the July 7 episode of his podcast. 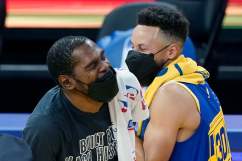