The Los Angeles Lakers have some time off in the bubble and Kyle Kuzma is glad to have some company.

Kuzma has been joined by his model girlfriend Winnie Harlow in the bubble and the couple has been living it up at the Disney World venue. Kuzma put up a photo with Harlow on Monday night that drew a viral reaction, with comments coming from a wide range of users, from Lakers owner Jeanie Buss to former Laker Nick Young.

“Bubble date starring Winnie Harlow,” Kuzma wrote in the caption of a photo of him cuddled up with Harlow in matching outfits.

Buss was one of the first to respond, writing: “I love Winnie Harlow and I love Kuz and I love you together. So bubbly!”

Among the treasure trove of comments was one from Swaggy P. “No wonder you hooping lol,” Young wrote.

Harlow had been supporting Kuzma from afar before guests were allowed in the bubble, but is glad to be reunited. Kuzma, 25, and Harlow, 26, have been dating since May, according to Page Six. ESPN reported that the league and players’ association agreed that non-family members must have “longstanding relationships” with those they’re visiting.

Kyle Kuzma Stepped up for Lakers Against Rockets 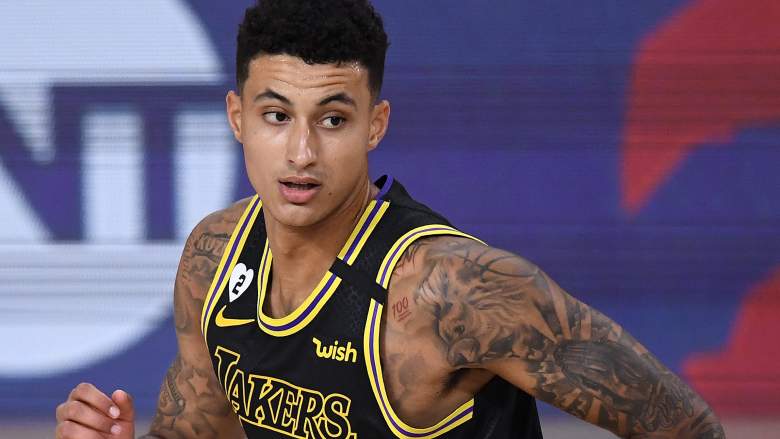 Kuzma and the Lakers earned some well-deserved time off after dispatching the Rockets in five games in their Western Conference semifinal matchup. Kuzma delivered double-digit points in three of the final four games, including 17 in the clinching contest.

“You can’t rattle us,” Kuzma said, via Bill Oram of The Athletic. “Can’t rattle us. After the first game in Portland, they were really hype, getting after it. We stayed calm through the first game in this series. Houston coming in hype, we just didn’t let it faze us. Kept attacking, kept being who we are. Laker basketball.”

There’s been a lot of buzz around Kuzma this season, who was slated to be the Lakers “third option” despite coming off the bench. But Kuzma isn’t worried about being a third option — he’s trying to be the third-best player on the court for Lakers by concentrating on his defense.

“Everybody makes a big deal out of me trying to be the third option, and to me, our team is not built like that,” Kuzma said as the Lakers prepared for the Rockets. “I think for me, my way to make that super impact is trying to be the third-best player, and that’s from the standpoint of trying to lock guys up, play with energy because that’s my strength, just try to give myself to the team and try to play hard. … I’ve noticed with just trying to do that has really allowed me to flourish.”

The Lakers don’t know if they’ll play that Nuggets or Clippers in the Western Conference Finals, but they know that their next series begins on Friday. While some time off to relax is nice, L.A. is eager to get back to the championship chase.

“It’s definitely a challenge, there’s no doubt about that,” coach Frank Vogel told reporters on Monday. “And the message with our group today is: You’re either getting better or you’re getting worse. And we not only want to stay sharp, we want to get better every time we step on the basketball court. So that’s got to be your focus. But at the same time, you’re just trying to get in enough work to stay in rhythm, keep your conditioning, but still take advantage of rest.”

Loading more stories
The Los Angeles Lakers have some time off in the bubble and Kyle Kuzma is glad to have some company.