The NBA Finals are not over yet thanks to Jimmy Butler’s heroic Game 5 performance that forced a Game 6 for his Miami Heat against the Los Angeles Lakers.

The Lakers would have liked to wrap up the series and hoist the Larry O’Brien Trophy on Friday night for a variety of reasons. But closing out the Heat became even more urgent when Anthony Davis came up limping in the first half. Things looked very grim initially, with “Achilles” becoming a trending term on Twitter after Davis rubbed that area of his leg after checking out of the game.

Injury scare for Anthony Davis, but he walked back to the bench under his own power. pic.twitter.com/F7P7R6Boj8

However, it turned out that the 6-foot-10 forward had reaggravated a heel injury he suffered in the Western Conference Finals against the Denver Nuggets.

Davis played 42 minutes in the loss but was hobbled for most of the fourth quarter. He had a key put-back on an airball late, but was obviously not himself.

Vogel on Anthony Davis: "He's battling through the heel. Struggling to move a little bit, but he toughed it out. We'll see how he feels tomorrow."

“He’s just battling through the heel. He was struggling to move a little bit but toughed it out, and we’ll see how he feels tomorrow,” Lakers head coach Frank Vogel said in his postgame press conference.

While Vogel is taking more of a wait-and-see approach, Davis left no question that he’ll be on the court for Game 6. That being said, he did admit that he was trying to stay active and hopefully ride the adrenaline to stay in the game.

“[Andre Iguodala] kind of stepped on it. Re-aggravated it. But I’ll be fine on Sunday,” Davis said. “Went out the end of the first and it just kind of just wore off and got back to normal. Just kept moving around. Just trying not to sit down. Get that adrenaline going and I was able to keep going and keep playing.”

Davis was the third star looking in on the duel between Jimmy Butler and LeBron James, who combined for 75 points — 35 from Butler and 40 from James. Davis still managed a respectable 28 points and 12 rebounds. 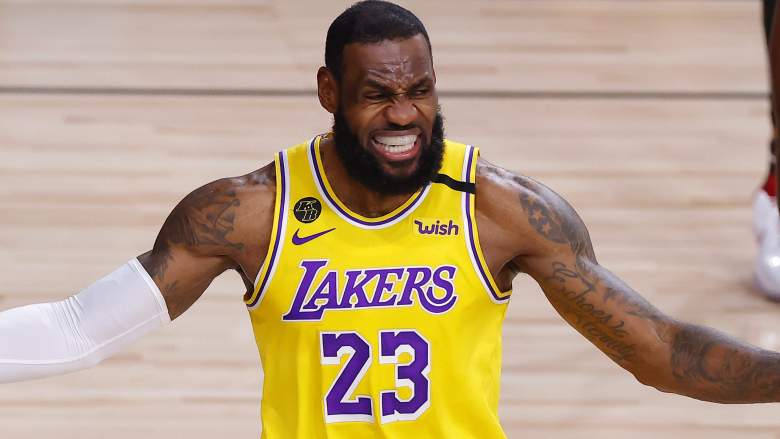 The Lakers opened the series as large favorites and remain so up 3-2 in the series. A win on Sunday would still lock up the franchise’s 17th championship. The Lakers were listed at -15,000 to win the series prior to Game 5, meaning it would take a $15,000 bet to win just $100 on the Lakers to take home the title.

While momentum is on Miami’s side, Davis is certain his side will come out with that hunger to close out the series in Game 6.

“It’s about execution,” he added. “We broke down too many times defensively. If we don’t have those plays, it’s a different game. We have to be better on the defensive end and take care of what we’ve got to take care of. Duncan Robinson came up too many times wide open. Two four-point plays. Offensive rebounds. Stuff that we can control.”