LeBron James finished second in MVP voting to Giannis Antetokounmpo, but he wasn’t the only Laker to finish runner-up to the Bucks star this awards season.

Antetokounmpo also beat out Los Angeles Lakers forward Anthony Davis for Defensive Player of the Year in a landslide, receiving 75 first-place votes out of 100. That’s something James objects to, especially after the defensive clinic Davis has put on for most of the postseason.

Davis’ latest display of defensive dominance came in Game 4 of the NBA Finals, taking on the assignment of Heat star Jimmy Butler late in the game. Butler was coming off a 40-point triple-double in Game 3, but was limited to just 22 in the crucial Game 4.

“I tried to be locked into him,” Davis told reporters after the game. “The last game he took over and imposed his will on the game and on both ends of the different floor. So we tried to give him a different look.”

Anthony Davis on defending Jimmy Butler: "I tried to be locked into him. The last game he took over and imposed his will on the game and on both ends of the different floor. So we tried to give him a different look."

James believes Davis’ versatility to not only guard but lock down a player Butler is why he deserved the DPOY honor over Antetokounmpo.

“That’s why he’s the Defensive Player of the Year,” James told reporters, per Mark Medina of USA Today.

LeBron James on Anthony Davis' performance and versatility: "That's why he's the Defensive Player of the Year."

Davis turned in a big performance after a disappointing showing in Game 3, notching 22 points, 9 rebounds and 4 blocks. He was also a plus-17 — the best by far on the Lakers — and hit a clutch 3-pointer at the end of the game.

Davis knows better than most about the difference defense can make thanks to his years in New Orleans.

“When I was in New Orleans, [Pelicans Coach] Alvin [Gentry] used to say it all the time, he used to preach defense,” Davis said. “I had the best offensive team. We would score 130 [points] and would never get past the second round because we didn’t play defense. You hear the cliché all the time, defense wins championships.”

Lakers' Anthony Davis: "When
I was in New Orleans, Alvin [Gentry] used to say it all the
time, he used to preach defense. I had the best offensive
team. We would score 130 and would never get past the
second round of the Western Conference because we
didn't play defense."

Davis made it clear when he landed with the Lakers during the offseason that winning Defensive Player of the Year was on his radar.

“I want to be Defensive Player of the Year. I think if I’m able to do that, I can help this team win,” Davis said in September (h/t Bleacher Report). “I want to make sure me and LeBron are on the All-Defensive Team. And for me personally, I just want to be the Defensive Player of the Year. If we’re able to hold teams under 100 [points], which is probably unrealistic but it should be our goal, I think we’ll have a shot at winning the title.” 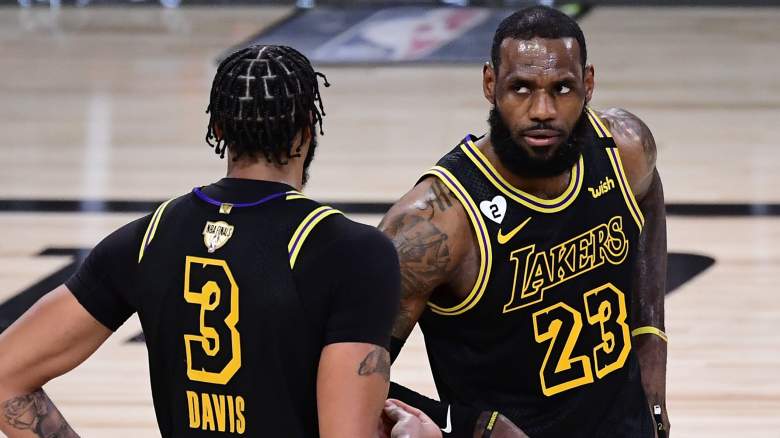 GettyAnthony Davis, left, and LeBron James, right, of the Lakers

The Lakers are one win from a title and the only debate left when it comes to hardware might be who the MVP of the Finals will be.

James has won the Finals MVP three times (2012, ‘13, ‘16) and was clearly the best player on those title-winning squads. But with Davis in the picture, things are different.

James is currently the favorite to win it at -225, with Davis sitting at +190. Davis delivered two massive performances to open up the Finals, but disappeared in Game 3 with foul trouble. That might be enough to give James the edge, although there will be no argument from either star when it’s eventually handed out.

“We know who we are. We know what we’re about. We want the best, seriously, every single day, both on and off the floor, for one another,” James said. “We’re just not jealous of one another. I think that you align that with respect, I think the sky’s the limit.”

Loading more stories
wpDiscuz
0
0
Would love your thoughts, please comment.x
()
x
| Reply
LeBron James finished second in MVP voting to Giannis Antetokounmpo, but he wasn't the only Laker to finish runner-up to the Bucks star this awards season.