TCU Horned Frogs quarterback Max Duggan is the son of Debra Duggan and Jim Duggan. He and his family are from Council Bluffs, Iowa, and he has two older siblings, a sister, Megan, and a brother, Sam.

Here’s what you need to know about Max Duggan’s family:

1. Max Duggan’s Mother, Deb Duggan, a Hurdler in College at the University of South Dakota, Says It’s ‘Surreal’ to See Her Son Playing for the College Football National Championship

Max Duggan’s mom, Deb Duggan, told Scorebook Live, “It’s crazy. It’s surreal. You have parties to watch the national championship game. You have chili. It’s like, ‘Who’s coming over?’ To think that we’re even attending it and then TCU is playing in it and Max is playing, it just doesn’t seem real. It doesn’t. I hope they play really well, obviously.”

When asked about how her son has become an idol to young fans, she told the website, “In the last few weeks, and I don’t know if it’s just me being a mother, but I’m blown away and it kind of brings tears to my eyes every time someone says that Max will stop and take a picture or sign an autograph. He sincerely will do it. It’s not like you’re putting him out. It just makes you feel good. We went to the Heisman ceremony, and one of the players had somebody that followed him at all times for the NIL. You couldn’t take his picture. You couldn’t get his autograph. All they did was control the whole NIL. We always said to Max, ‘Remember when you were a little kid and you would see a high school player and you would think they were like an NFL player?’ It’s like, remember, these little kids are like you were at that same age.”

According to her LinkedIn profile, Deb Duggan is a senior human resources specialist and works in talent acquisition for Mutual of Omaha. She previously worked for American National Bank as a senior HR business partner and at the First National Bank of Omaha. She graduated from the University of South Dakota. While in college, Duggan’s mother was a hurdler and she is recognized in the school’s hall of fame, according to the Des Moines Register.

Deb Duggan told Scorebook Live, “Just everything that TCU represents. The small school. They’re not supposed to win. They’re not the blueblood. Kids didn’t transfer. There’s some NIL money, but not the big deals. I hope they win for all those reasons. ”

According to the Des Moines Register, the elder Duggan was a quarterback at the University of South Dakota. Jim Duggan told the newspaper in 2017 about his son, “I’ve been doing this a long time and had some good quarterbacks throughout my career. You just realize that certain kids have intangibles you can’t coach, and you might not know how good those are until you throw them into the fire.”

Jim Duggan added, “He’d get mad at me in youth football because I’d always put him on the less-talented team, trying to make him earn it. But by the time he got to high school, we knew he had some God-given talents that might allow him to play right away”

Jim Duggan, who is not related to the wrestling star nicknamed “Hacksaw,” retired in 2019, according to the Lewis Central football team’s Twitter account. The team tweeted, “It’s official, Coach Jim Duggan is retiring. We are losing a great coach and and great person. He changed the culture here and held people accountable. Thanks Coach Duggan, your winning culture will continue because of what you taught the people around you #dothelittlethings.” He taught physical education.

Max Duggan has two older siblings, a brother, Sam, and a daughter, Megan, who were adopted from South Kora, according to Omaha.com. They are both now in their 20s.

His parents told the newspaper in 2017 they struggled to get pregnant after getting married and decided to adopt. Deb Duggan told Omaha.com, “This is just the way God planned our family to be,” she said. “Kids are blessings no matter how they come about.”

Sam Duggan works as a sales consultant and graduated from the University of Denver in 2018. His sister, Megan Duggan, graduated from Saint Albert High School in 2016 and she studied at Iowa Western Community College, according to Omaha.com.

4. Duggan’s Family Helped Him Overcome a Heart Condition, Wolff-Parkinson-White Syndrome, That Once Led to a 9-Hour Surgery

Duggan has also had the support of his family off the field as he’s had to overcome health issues. Duggan has Wolff-Parkinson-White syndrome, a heart condition, according to Texas Monthly. He was diagnosed with the condition in 2020 prior to that season, Texas Monthly wrote.

He underwent a nine-hour surgery. He told Texas Monthly, “And then two days later, I had a blood clot from the surgery, so I had to go into emergency surgery right after that. It kind of just puts a stop in your life.”

His father, Jim Duggan, told The Daily Nonpareil, “He was going through team protocol where he had an EKG (electrocardiogram), and they discovered this heart abnormality. They treated it, and now he’s recovering.”

5. Duggan Said His Family Has Been His ‘Foundation’

In a message to his family posted on Instagram ahead of TCU’s National Championship showdown against the Georgia Bulldogs on January 9, 2023, Duggan wrote, “Thank you for your continued love and support, and for always being in my corner. You have consistently motivated me to be a better player and person. Y’all have been the foundation for my development.”

In the Instagram post, Duggan also announced he would be declaring for the NFL Draft after the title game. He wrote to his teammates, “Thank you for pushing me everyday. Our friendships will last well beyond our final days as athletes. It has been an honor to play with you guys. Through all of our failure and successes, nobody could stand by my side like you guys.”

To his coaches, Duggan wrote, “Thank you for the leadership and support you have shown. Thank you for the guidance, support and belief in me. It has been an incredible experience to play under all of you guys. You’re the role models we needed as we grew into men.” To his fans, Horned Frog Nation, he wrote, “Thank you for allowing me to be a part of this amazing university. Thank you for the cheers, support, passion and the opportunity to play the game. To have all this in front of the best fans in the nation is the most fortunate college career I could have imagined.” 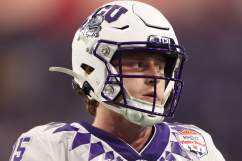