Getty Kevin Durant #7 of the Brooklyn Nets looks to pass during the first half of the Eastern Conference 2022 Play-In Tournament at the Barclays Center on April 12, 2022.

After months of intense speculation over the Miami Heat‘s chances to facilitate a blockbuster trade for Brooklyn Nets forward Kevin Durant, and one day after The Athletic’s Shams Charania reported that they remained one of “the most serious threats to land” the 12-time All-Star — all the hype came crashing down.

On Tuesday, August 23, the Nets’ general manager Sean Marks released the following announcement: “Steve Nash, and I, together with Joe Tsai and Clara Wu Tsai, met with Kevin Durant and Rich Kleinman in Los Angeles yesterday. We have agreed to move forward with our partnership. We are focusing on basketball, with one collective goal in mind: build a lasting franchise to bring a championship to Brooklyn.”

Back on June 30, when Durant first requested a trade out of Brooklyn, ESPN’s Adrian Wojnarowski named the Heat as one of his top “wish list” destinations. It was just last summer that he signed a four-year $194 million contract extension with the Nets, which was set to kick in during the 2022-23 NBA season, so the move came as a major surprise.

Durant backing out of his trade demand came as a major disappointment on Tuesday, especially for Heat Nation. Referencing the Heat’s pursuit to land Durant back in 2016, one fan tweeted, “Twice now Durant has wasted the Heat’s time in free agency. Never again.” Sports Illustrated’s Heat reporter Shandel Richardson tweeted, “Welp, there goes that.”

After Durant reneged on his trade request, fans and analysts from the Eastern Conference also expressed worry on Twitter, as a Nets roster with a healthy Durant, Kyrie Irving, and Ben Simmons is a tough team to beat.

Where do you rank the Sixers among the top teams in East with Nets, Bucks, Celtics, Heat, Raptors, Bulls, Hawks pic.twitter.com/q47tjl9jgs

Several NBA reporters believe that Durant remaining in Brooklyn now ups the ante for teams looking to trade for Utah Jazz star Donovan Mitchell, another player the Heat is actively trying to pursue. The Athletic’s Fred Katz tweeted, “Something to watch: With the Kevin Durant trade market no longer in existence, a team that was holding onto pieces to use in a Durant trade could choose to use those same players/picks to enter the Donovan Mitchell sweepstakes.”

The Heat Was ‘Disinclined’ to Trade Bam Adebayo for Durant 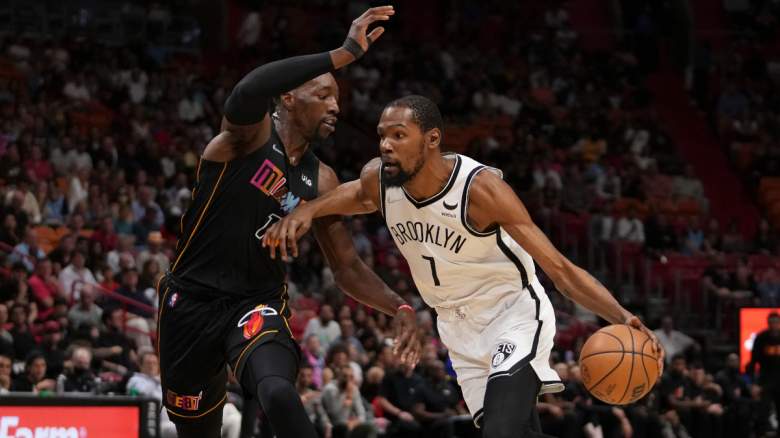 GettyBig man Bam Adebayo defends Kevin Durant during a game between the Miami Heat and the Brooklyn Nets.

Brooklyn’s insanely high asking price for the 33-year-old forward made it impossible for the Heat to land Durant, along with any other interested team. With the Nets playing hardball, the Heat seemed to have drawn a line in the sand when it comes to how far they will gut the team to land the two-time Finals MVP.

The Heat is “disinclined” to part ways with All-Star center Bam Adebayo as previously reported by Miami Herald’s Barry Jackson and Anthony Chiang, so “while the team remains interested in Kevin Durant, the Brooklyn Nets have displayed little interest in the Heat’s offer for the high-scoring superstar and Miami is moving ahead with its current roster for next season, according to sources briefed on the situation.”

Save for P.J. Tucker, who signed with the Sixers, and Miami’s 2022 first-round draft pick, Nikola Jovic, the Heat appear to be running it back with a nearly the exact same roster from last season.

Unless the Heat’s front office is working hard behind the scenes to land Mitchell, it seems likely that Herro, NBA’s 2022 Sixth Man of the Year, will soon earn a massive pay raise.

Loading more stories
wpDiscuz
0
0
Would love your thoughts, please comment.x
()
x
| Reply
After months of speculation over the Heat being one of the strongest contenders to land Kevin Durant, the Nets star will return to Brooklyn.