One of the quietest offseason storylines for the New York Jets has been Quinnen Williams’ contract situation.

It was a buzz-worthy topic at the NFL combine because of his pending fifth-year option, but general manager Joe Douglas quickly clarified that they fully intended on picking that up.

#Jets GM Joe Douglas confirmed that he met up & had some productive conversations w/ @AgentNicoleLynn at the #NFLCombine to talk about Quinnen Williams (@QuinnenWilliams) + also confirmed the team will pick up his 5th year option: #TakeFlight #NFL pic.twitter.com/zoubumsUsp

Accepting the fifth-year option was a formality for the Jets, the much more intense conversation revolves around a juicy long-term deal.

On the Flight Deck Podcast, Rich Cimini of ESPN gave us an update on the Williams contract talks.

He said that the Jets brass has been “checking in” throughout the offseason with both Williams and his representation about a long-term contract.

When talking about what a deal could look like Cimini said something in the $17 to $20 million per year range on a multi-year deal.

#Jets have been "checking in" w/ Quinnen Williams (@QuinnenWilliams) & his agent (@AgentNicoleLynn) "basically throughout the entire offseason" about a long-term deal, per @RichCimini.

He said you're probably looking at something in the "$17M-$20M a year range" #TakeFlight pic.twitter.com/JyLnQTCMJD

A few hours after I sent out this tweet with some of the highlights from the podcast, Williams responded by saying, “lol @RichCimini stop lying on Twitter 😂.” 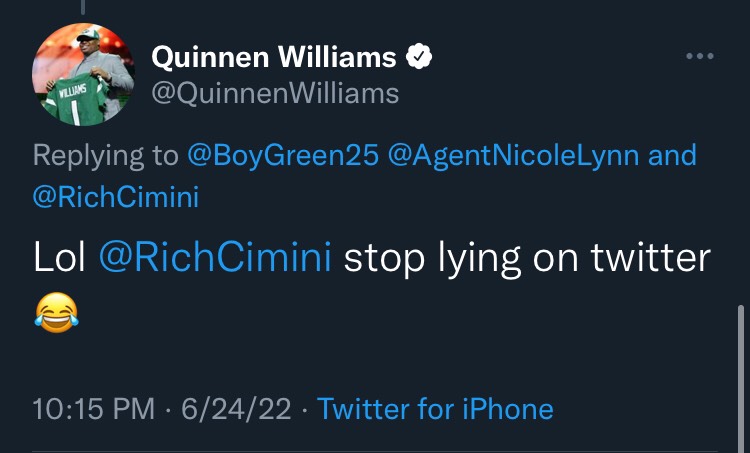 Almost immediately after hitting send, Williams went back and deleted the tweet.

It is unclear what part of the tweet Williams believes Cimini was lying about.

Whether it was about the Jets staying in contact throughout the offseason. Or perhaps about his informed speculation about what the particular financials could look like on a new deal.

Either way, Williams did not seem to be a fan of the narrative around his contract status this offseason.

He is projected to land a four-year deal for $70 million. That would be an annual average of $17.7 million per season. At this current moment in time, Williams would become the fifth highest-paid defensive tackle in the NFL based on that annual salary.

Cimini did say, despite the two sides talking, he would be surprised if a new deal got done ahead of the season. The most recent defensive tackles that were paid didn’t get those long-term deals until at least after their fourth seasons.

The former Alabama product is just entering his fourth campaign in 2022.

When fans heard these projected numbers on social media, they were seemingly split on what the organization should do.

Some argued that the Jets should pay the man and make him a key building block for the future.

Not worth it. Trade him.

While others argued that they should just trade him off to the highest bidder and let someone else pay that kind of contract.

Gang Green hasn’t handed out a lot of homegrown long-term deals because quite frankly there haven’t been many players worthy. Poor drafting, cough cough.

At some point in time, the Jets are going to have to pay someone. That would send a clear message to the locker room and lock in a key building block for the future.

We’ll see what the Jets do here on this Williams contract. They could be proactive and get something done this offseason or they could wait and see what happens this season.

If he blows up then they’ll have to pay a king’s ransom, but at least they’ll know exactly who they are investing in. As opposed to paying him now and him potentially not living up to the hype in 2022.

READ NEXT: Big Time Trade for No. 1 Pick Could Unseat 2 Ex-Jets QBs: Report