The New York Knicks managed to climb back to a .500 record after a dominating victory over Luka Doncic and the Dallas Mavericks.

With the playoffs in striking distance, and RJ Barrett showing signs of significantly ramping up his game, the Knicks made the first major move of the trade season in the NBA by snagging Atlanta Hawks forward Cam Reddish in a trade, according to a report by ESPN’s Adrian Wojnarowski.

Reddish’s minutes with the Hawks have been sporadic and it seems like he had been phased out of the rotation by the time his trade came to fruition.

Just a few years ago, he was the number 10 pick by the Hawks, but things just haven’t panned out for him in Atlanta, especially with the emergence of Trae Young and John Collins as one of the best 1-2 combos in the league.

Reddish will now have a chance to revive his career with the Knicks.

ESPN Sources: The Atlanta Hawks are trading forward Cam Reddish to the New York Knicks for a deal that includes a protected 2022 first-round pick via Charlotte. Knicks also acquire Solomon Hill and a 2025 second-round pick via Brooklyn in trade.

Something that has never been in question with Reddish is his athletic ability. He’s been known to throw down a high-flying dunk in the past, and it seems like he’ll have the option to do that with the Knicks.

The Knicks made a trade at this point in the season last year for Derrick Rose and it helped them get into the playoffs. As it turns out, history repeats itself in a trade for Reddish.

It’s unclear exactly how Reddish will fit in with the Knicks, but it’ll likely be him coming off the bench as RJ Barrett and Evan Fournier both seem to be locked into the starting lineup.

Reddish has appeared in just 34 games this season to go along with seven starts, and he’s actually posted his best shooting splits of the year at 40 percent from the floor and close to 38 percent from three. Those numbers will need to improve with the Knicks if he wants to see more consistent minutes going forward.

How Does He Fit In? 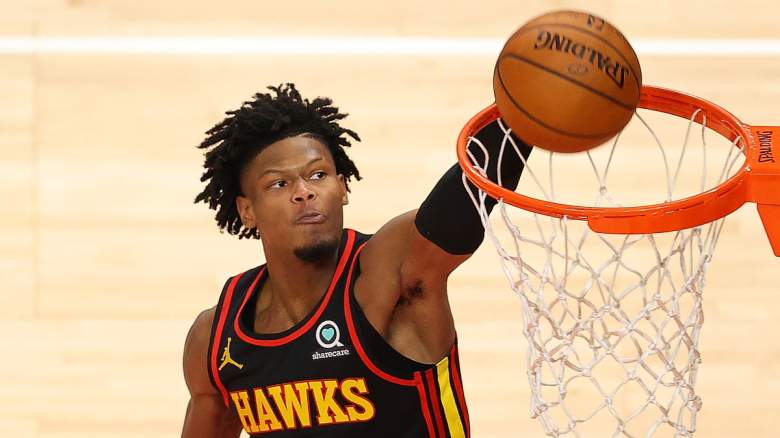 GettyAtlanta Hawks forward Cam Reddish attempts to dunk the ball during a game against the New York Knicks.

He’ll likely take on a bigger role with the Knicks since this is a player who is still very young and has a lot to prove. At 6’8″, he is primarily a small forward but he could likely slide over to power forward if the Knicks want to go with a smaller lineup.

What this trade does mean is the Jerami Grant to the Knicks dream appears to be dead since the team wouldn’t want to load up too much on the same position.

New York is including Kevin Knox in trade to Atlanta, sources tell ESPN.

In the trade, the Knicks also acquire Solomon Hill and a 2025 draft pick while they send over a protected 2022 draft pick via the Charlotte Hornets and former lottery pick Kevin Knox in exchange.

Reddish and Barrett were college teammates at Duke, so they will be reunited yet again. While both of them were lottery picks, their careers have gone in wildly different directions, but there’s still a chance Reddish could get things turned around and turn into a highly valuable rotation player.

[ JOIN US ] I get paid more than $120 to $350 per hour for working online. I heard about this job 3 months ago and after joining this I have earned easily $24000k from this without having online working skills . Simply give it a shot on the accompanying site…
Here is I started.…………>> http://Www.NETCASH1.Com