The New York Knicks made a big trade earlier in January that landed them the talents of Cam Reddish, a former top 10 draft pick, in exchange for Kevin Knox who got next to no playing time for the team.

While the Knicks didn’t free up any minutes in that trade, the expectation was that Reddish was going to find a way to get playing time since trades like that usually happen for a reason, but it just hasn’t been the case so far. He’s even spoken up following the trade and said he still believes he can be a star in this league.

After not playing in the loss to the Milwaukee Bucks, Knicks coach Tom Thibodeau explained why Reddish hasn’t been able to crack the rotation just yet.

“Everything was discussed….we like the talent….You can’t keep adding…without taking someone out….Just have to be patient & work our way thru it”: Thibs on talks with the front office re: the trade for Cam Reddish, a DNP vs Bucks who has played 15.5 total minutes for NY pic.twitter.com/nH9j5hb0K8

After logging 10 minutes against the Miami Heat, largely due to the blowout, Reddish did not get any minutes in a much closer game against the defending champs.

Thibodeau revealed that it’s a difficult process and you can’t just simply remove somebody from the rotation to make way for another player.

“Everything was discussed, you know, we like who [Reddish] is,” he said. “We like the talent. It’s a long season. You know, we traded someone who wasn’t in the rotation. So, you can’t keep adding to without taking someone out, or you know, you have injuries. Just have to be patient and work our way through it.”

It’s hard to imagine a trade like this being made without the promise of Reddish getting playing time, something he was having a hard doing with his previous team, the Atlanta Hawks. So far during his Knicks tenure Reddish has only played a total of 15 minutes.

Recent reports have indicated the Knicks are willing to trade away their veteran talent such as Kemba Walker, Evan Fournier and Alec Burks, and that could be what’s needed for Reddish to get more minutes. 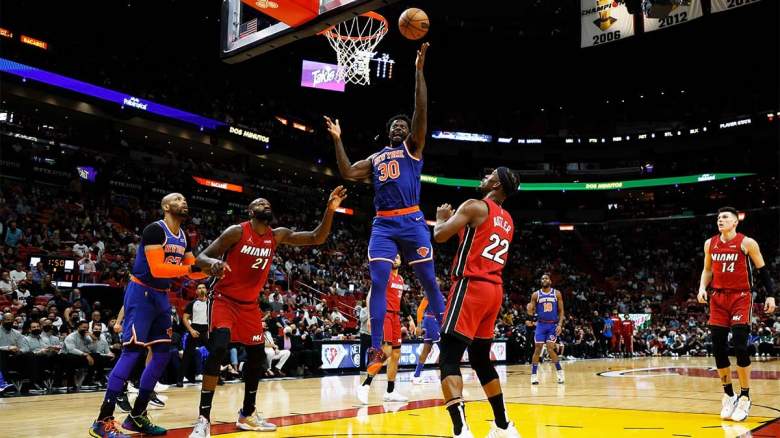 GettyJulius Randle goes for a basket against the Miami Heat.

With so many rumors swirling around, it’s hard to imagine the Knicks not being busy before the trade deadline, especially if the team continues its free fall.

Currently, they find themselves on the outside looking in on the NBA play-in tournament, so they’ll need to do some soul searching and figure out if the season is worth salvaging, or if they should shed some salaries and build for the future.

With the Knicks playing in one of the most lucrative markets in all of basketball, their name will always be in play when it comes to high-profile talent, but they’ve had trouble actually attracting that talent. Both Kevin Durant and Kyrie Irving spurned the Knicks in the past, but with a young core to build around for the first time in over a decade, the future of the team does look brighter than it has been in a while, and that could be enough to convince a star to join them either during the season or through free agency.

READ NEXT: Julius Randle Sends Direct Message On His Future With Knicks