Torri Huske is an American swimmer who is competing at the 2020 Tokyo Olympics. Huske is of American and Chinese descent. Her mother was born in China and came to the United States in 1991. Huske and her family live in Arlington, Virginia.

The 18-year-old Huske, whose full name is Victoria Huske, is swimming in her first Olympics in Tokyo. She qualified for the American team during the 2021 U.S. Qualifying races in Omaha with a record-setting time of 55.78 in the 100m butterfly, setting her up as a contender to watch in Japan. Huske will be studying at Stanford University after the Olympics. Huske does not have any siblings, she is an only child.

Huske’s father, Jim Huske, told the Washington City Paper after his daughter qualified for the Olympics, “We’re not surprised. In fact, none of us are surprised. Because she always swims, the bigger the meet, the better she does, and this was no different. But we’re surprised at how it’s come together so perfectly … That being said, you’re just biting your nails, and you’re relieved.”

Here’s what you need to know about Torri Huske’s family:

1. Torri Huske’s Mother, Ying Weng Huske, Was Born in Guangzhou, China, Where She Grew Up in a Labor Camp, Before Coming to America, Studying at Virginia Tech & Working for the U.S. Navy

Huske added, “Once they opened up again, she was 16 and she had to take this test to potentially get in, and she was competing against thirty years old because they had been closed for so long, so it was competitive getting in, but she is super smart. She ended up going to college at 16 in China and later she moved to the US. She studied architecture in China but she absolutely hated it, so later she studied engineering, and she studied at Virginia Tech, and she didn’t like engineering that much either, and then she became like an IT person.”

According to her LinkedIn profile, Ying Huske has worked in IT as a systems admin at the U.S. Naval Undersea Warfare Center in Newport, and as a server analyst and administrator for the McKean Defense Group. She now works as an IT specialist at the Naval Sea Systems Command in Carderock, Maryland.

Ying Huske, who came to the U.S. in 19991 told NBC Sports, “The government paid for our tuition, and they basically owned us. I came [to the U.S.] for a better life, better opportunities and a better life for my future family.”

Jim Huske told NBC Sports about his wife, “She can solve problems like nobody’s business. Torri’s mind is similar to her mom’s.” Jim and Ying Huske have been married since 2000.

Huske’s father, Jim Huske, is an executive coach and organizational consultant who previously worked as a senior executive at a nonprofit and in politics, according to his LinkedIn profile. Jim Huske graduated from the University of Iowa in 1988 with a triple major in communications, political science and sociology, before completing his master’s degree in public administration at Northern Illinois University in 1993 and completed classwork for a doctorate in education at Creighton University in 2016, he said on LinkedIn.

Huske was the senior vice president of Graduate School USA until 2013, and previously worked for the National Oceanic & Atmospheric Administration, and as a legislative fellow for former U.S. Senator Robert Kerrey. He was also a presidential management fellow in the White House Office of Personnel Management from 1993 to 1994.

Huske wrote on LinkedIn he has, “20+ years of results-driven success in leading organizations and teams that foster change and consistently exceed expectations. I am a mission-focused, proven change agent, with experience leading and managing all aspects of diverse, geographically distributed national and international organizations. My people centered management style, customer orientation, and established track record has allowed me to help organizations reach their potential through operational excellence. Over the course of my career I have gained extensive experience in all aspects of corporate governance. I have led business development, marketing and human resources functions.”

3. Huske’s Parents Both Supported Her as She Emerged as One of the Top Swimmers in the U.S.

Torri Huske’s parents have been major supporters of her since she began swimming at age 5 and become a phenom as she got older. She swam at the Arlington Aquatic Club under coach Evan Stiles in Virginia, according to her biography on the Team USA website. Huske was born December 7, 2002, in Virginia, according to her Team USA bio. She graduated from Yorktown High School in 2021. When she was 8, Huske began swimming faster than her mother and it was then the family realized how good she could be.

“It’s been surreal. You work toward this, you see her do so many things to get there and when it happens you’re amazed. Everything that’s gone on is just a whirlwind,” Jim Huske told WJLA, a Virginia news station, after Torri Huske qualified for the Olympics. “We knew she was capable of this. I felt relief. To run those times and to really put it out there, she performed like we knew she could. Later in the night, I became more emotional. I’m the parent of an Olympian, it’s such an incredible moment.”

Huske’s mother, Ying, told NBC Sports the delay of a year helped her daughter, “I was afraid that she would be feeling fatigued, mentally and physically. It turned out it’s better for her.” Her father told NBC Sports, “We thought there was an outside chance in one event. Everything’s come together.”

4. Huske & Her Family Struggled to Find Virginia-Area Olympic-Sized Pools for Her to Train in Amid the COVID-19 Pandemic

Like many Olympic swimmers, Huske struggled to find pools to train in during the COVID-19 pandemic. She told USA Today, “I was freaking out when all the pools first closed, but when the Olympics were postponed and I knew we had another year, it was a relief. I knew that time would be beneficial to me.” USA Today wrote, “In early April 2020, Torri’s father Jim got in touch with a pool company that knew about a recently-opened backyard pool in Gainesville, Virginia, nearly an hour drive from the Huskes’ Arlington home. It was an oval pool, 42 feet long, very short by an elite swimmer’s standards, so Torri attached a bungee-style cord to a belt around her waist and swam in place as Stiles or her father held tight to the end of the cord on the pool deck behind her.”

They decided it would be best for her to stay in Virginia, “The problem is, Torri’s very comfortable here with her friends and her swimming team, and she knows them, and we know how important it is just to have a great mental mind-set. We don’t want to mess with that,” Jim Huske told The Washington Post.

Jim Huske told WJLA, “She’s doing great. She’s focused and she’s really mature. She’s all business. The way you can see Torri most is when you look at her standing right before the race, every person is waving, saying hello to the crowd. Torri has her hand on her block and she’s just thinking about her race and that’s what’s important to her.”

5. Torri Huske Says Her Mother, Ying Huske, Is One of Her Biggest Inspirations

Torri Huske told USA Swimming about her immigrant mother, Ying Huske, “I feel like she is a really big inspiration to me. Yeah, I’m just lucky to have her.” Ying Huske told The Washington Post, “I feel like I’m living out my American Dream.”

Ying Huske spoke “barely” any English when she moved to the U.S., according to The Post. Jim Huske told the newspaper, “When you come over and you start your whole life over and you don’t have a lot to start with, nothing rattles you.” He said his daughter has taken after her mother.

Ying Huske told The Washington Post, “She’s a hard-working girl. Sometimes I have to say: ‘Hey Tori, relax! You don’t have to be so serious.'” 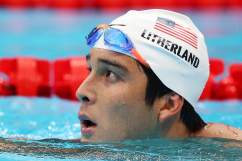 Loading more stories
wpDiscuz
0
0
Would love your thoughts, please comment.x
()
x
| Reply
Torri Huske is an American swimmer who is competing at the 2020 Tokyo Olympics. Here's what you need to know about her family.