Coco is the first movie with a nine-digit budget to feature an all-Latino cast and is a beautiful love-letter to Mexico, its history and culture. It’s filled with tributes to Dia de Los Muertos, the Day of the Dead celebration, its music, and folklore.

Coco debuted in Mexico a month before it hit American theaters, and was the highest-grossing Mexican film of all time. It did equally as well with US audiences and won several Oscars for its animation and music. The lead character is voiced by relative newcomer Anthony Gonzalez, but it also features the voice acting of veteran actors Edward James Olmos and Benjamin Bratt.

You can watch Coco online with Disney+ starting today, and its themes of family, following your dreams, and honoring your ancestors are relatable for all viewers. Coco streaming continues to grow its place in the Disney universe, cementing it as one of the most influential films of all time.

How to Stream ‘Coco’ – Exclusively on Disney+

Coco is one of the recently well-received Disney animated movies that will be streaming exclusively on Disney’s new subscription streaming service, Disney+.

You can sign up for a 7-day free trial of Disney+ HERE, which will allow you to stream Coco and hundreds of other movies and shows on your computer, phone, tablet, smart TV or streaming device. If you extend past the free trial, the service costs $6.99/month. You may also opt for this discount bundle of Disney+, Hulu and ESPN+ for $12.99/month.

Release Date: November 22, 2017
Creators: Lee Unkrich, Jason Katz, Matthew Aldrich, Adrian Molina
Director: Lee Unkrich
Starring: Anthony Gonzalez, Gael Garcia Bernal, Benjamin Bratt, Edward James Olmos
Rating: PG
Synopsis: A young musician is frustrated by his family’s ban on music, so he ventures to the Land of the Dead to find his grandfather, who is a legendary musician himself, to seek his advice on his musical future.

Coco has a runtime of 105 minutes for the theatrical release.

Miguel lives in the city of Santa Cecilia, Mexico where he dreams of being a successful musician. The only problem is, his family has ban music for generations strictly forbids it. The reason music is not allowed is that Miguel’s great-great-grandmother, Imelda, married a musician who left her and their daughter to pursue and career in music and never returned. As a result, Imelda banned music altogether and became a shoe-maker.

Miguel, despite his grandmother’s hatred for music, dreams of playing music and idolizes Ernesto de la Cruz. He secretly teaches himself to play to guitar to be more like Ernesto. On the Day of the Dead, Miguel accidentally damages a picture of Coco and her mother and discovers a picture of his great-great-grandfather holding Ernesto’s famous guitar.

Miguel believes Ernesto to be his ancestor and is emboldened to enter a talent show, against the protests of his family. He breaks into Ernesto’s crypt to steal his guitar, but upon one strum on the instrument, Miguel becomes invisible to everyone in the village. He can, however, interact with his dead relatives, who look like skeletons, and are visiting from the Land of the Dead.

His dead relatives take him back to the Land of the Dead, but in order to return to the Land of the Living, he must get Imelda’s blessing to remove the curse he incurred when he stole from the dead. Imelda will only offer her blessing for his return if he vows to give up music, but Miguel refuses. He decides to search for Ernesto and get his blessing.

On his journey, Miguel meets Héctor who agrees to help him only if he can return back to the Land of the Living to visit his daughter. Héctor enters Miguel in a talent contest because the prize is entry to Ernesto’s mansion, but he can’t perform because his family interrupts, causing him to run.

Miguel sneaks into Ernesto’s mansion anyway where Ernesto invites him in as an ancestor. Ernesto and Héctor renew an old argument and it is revealed that Ernesto poisoned Héctor and stole his guitar, passing it off as his own.

Ernesto imprisons Miguel and Héctor and they discover that Héctor is the real great-great-grandfather of Miguel. Imelda rescues the duo, with help of Miguel’s relatives, and Miguel tells Imelda the real story of what happened to her husband, exposing Ernesto’s crimes to everyone.

As the sun rises, it seems that Miguel might be stuck in the Land of the Living, but Imelda and Héctor offer him their blessing and he is able to return.

Now the truth is out, the ban on music has been lifted in Miguel’s family. 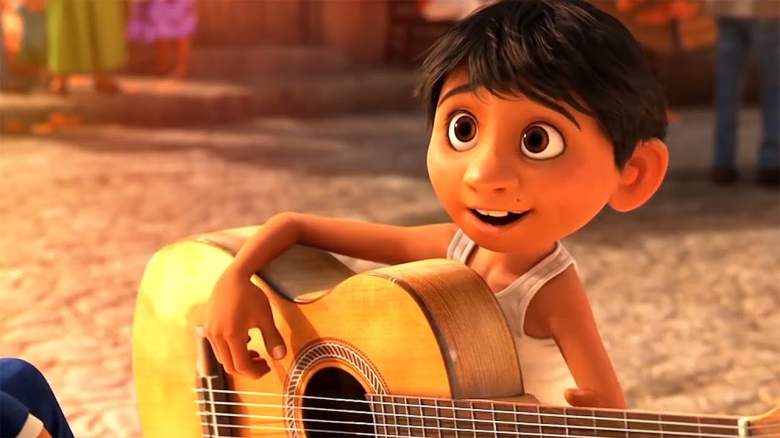 It is important to note that Coco is the first Disney movie to cast an all LatinX cast.

Anthony Gonzalez was initially cast as Miguel when he was nine, but because production took so long, he didn’t actually start work on the project until he was eleven. In fact, another young actor was originally set to voice Miguel, but he went through puberty waiting to record, causing his voice to change and sound too old for the young Miguel.

Gael Garcia Bernal is a successful actor, appearing in dozens of Spanish-speaking films over his decades-long career. However, he became beloved by American audiences when he starred in the critically acclaimed drama series, ‘Mozart in the Jungle.’ Garcia Bernal is the only actor to voice his character in both the English and Spanish speaking versions of the film.

Benjamin Bratt has starred in some of the most beloved contributions in American popular culture. He plays Manny’s father on the beloved ABC series Modern Family, and was the resident dreamboat on the Shonda Rhimes drama Private Practice. He was reportedly touched when he was asked to voice Ernesto in ‘Coco,’ calling him the “Mexican Frank Sinatra.” It was important to him to be in a film that highlighted Latin culture.

Edward James Olmos is a respected and prolific actor, whose career has spanned over four decades. Currently, Olmos plays Felipe Reyes on FX’s drama Mayans M.C which also focuses on the lives of Mexican-American characters. He was also in the wildly popular cult classic of the eighties, Miami Vice as Castillo. He is deeply committed to his roles, and it is rumored that he gained 20 pounds and purposefully thinned his hair for the award-winning movie, Stand and Deliver.

Like most of the movie, the ‘Coco’ soundtrack is a beautiful tribute to the Mexican culture. The score was composed by Michael Giacchino with lyrics by Germaine Franco, Adrian Molina, Robert Lopez, and Kristen Anderson-Lopez. The song, ‘Remember Me’ won the Academy Award for Best Original Song and the album broke top 40 on the Billboard 200.

‘Coco’ at the Box Office

Coco is widely beloved and the box office numbers reflect the affection generated in audiences. The movie grossed over $800 million dollars worldwide, and spend more days at number one than any other animated movie of the twenty-first century. It opened in Mexico three weeks before the US and went on to be the country’s highest-grossing film.

‘Coco’ Reviews – What the Critics Said

Where ‘Coco’ Fits in the Disney Movie Pantheon

Although Disney often offers movies that bring people together in their love for the film, there have been few films that garnered the kind of reaction Coco did. Aside from breaking cultural and language barriers, the movie made enough money to be included on many ‘best-of’ lists.

1. It Took a Very Long Time to Get Right

‘Coco’ was first conceived in 2011, but production didn’t wrap up fully until 2017. The six years it took to make it to theaters set the record for being the Pixar animation with the longest schedule.

2. The Land of the Dead  is Dead in Several Ways

The Land of the Dead, along with being the place for souls of the dead on Earth, also has a lot of old, obsolete technology, like the eighties-era Macintosh computer. This makes perfect sense since the machines are “dead’ technology.

3. The Name of the Movie Had to be Changed in Brazil For a Very Unique Reason

The movie debuted as ‘Viva’ in Brazil to avoid any confusion about the movie’s plot. In Portuguese, the word côco loosely translates to poop. However, without the accent over the o, it means the fruit of the palm tree that yields coconut water.

5. It Offers Homage to Another Mexican Artist, Frida Kahlo

The performance Frida Kahlo does for Ernesto’s show is an allusion to two of her famous paintings, “Still Life, Round,’ and ‘Last Supper.’