The 7-inch tablet arena just got another addition at the recent World Mobile Congress. Asus, the same company who brought you the Padfone, are now bringing you the Fonepad. The new tablet can be used to make phone calls. Let’s dive into some of the facts about this new tablet that you need to have at your fingertips.

1. You Can Make Calls Without Looking Ridiculous


There is no doubt that you would look ridiculous walking around with a 7-inch tablet against your ear on the streets. Fortunately, Asus avoids this embarrassment by use of a headset or Bluetooth accessory. Making calls from your tablet makes sense, since research has shown more people use their smartphones for email, browsing and apps than for voice. The Fonepad will come with 3G and WiFi.br>

2. The Fonepad Has a Long Battery Life
The Fonepad has a large 4270mAH battery that offers up to nine hours of continued usage. This is to be expected, considering that other high-end tablets like the Nexus 7, and the iPad also operate more or less within that range.

3. The Fonepad Has a Beautiful Design


At a time when everything about a device matters, it’s nice to know that you wont be embarrassed, if you are spotted with the Fonepad. The tablet spots a beautiful metallic design that can be held comfortably in one hand. The high resolution screen also contributes to its sleek look.

4. The Fonepad Won’t Have As Many Issues With Performance


Android devices are known to have performance issues, especially after an upgrade. The Asus Fonepad will run on Android 4.1 Jelly Bean, and will be powered by Intel’s Atom Z2420 processor, clocked in at 1.2GHz and has 2GB of RAM. Intel’s latest processor was introduced at this year’s CES 2013.

5. The Fonepad Has a Superior Screen Resolution


While the majority of 7-inch screen tablets out there tend to be 1024 x 600, the Fonepad is a 1280 x 800 IPS display tablet. This offers a clean and crisp picture view similar to what you get with the Nexus 7.

6. The Fonepad Comes With Expandable Memory


The Fonepad will come in champagne gold or titanium gray, and you will have the option to buy in 8GB or 16GB of internal storage. The Fonepad offers SD memory card support by incorporating a Micro-SD slot. The Micro-SD slot will give you an additional 32GB of storage space.

7. You Can Record in HD
To do justice to the high resolution HD screen, Asus has added 1080p full HD video decoding support allowing you to enjoy all your movies, photos and web page text on a crisp, multi-touch screen. This is as far as you can get to a well-rounded HD experience.

8. The Fonepad Has a 178-degree Wide Viewing Angle


Offering such a wide viewing angle, the Fonepad is still viewable even against ambient light and room glare, making it ideal for use outdoors. Plasma TVs and front projectors are the only ones known to offer such wide viewing angles, until now that is.

9.Asus Added Its Own Apps

10. The Price For the Fonepad is Reasonable
Sitting underneath the iPad Mini and above the Nexus 7, the Fonepad has been priced competitively at $249. The Asus Fonepad will be available globally in March. 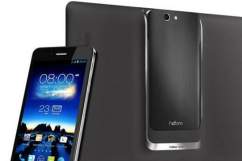