In a televised interview with CBS newsman Charlie Rose, Oracle CEO Larry Ellison had a few choice words about competitors Apple and Google. The main point of this rare sit down was to discuss the controversial NSA surveillance issues that have been plaguing tech companys. The few words Ellison had was that he considers these data collection methods “essential” but would be opposed to it if politicians “harnessed” it for political targeting.

Ellison shared his thoughts about two famous Silicon Valley stalwarts as well. According to the exec, Steve Job’s pride and joy has a dark future ahead. When asked by Rose below how he thought his friend’s company would fare, Ellison responded with “Well, we already know.” “We conducted the experiment, it’s been done.” the mogul continued as he gestured with his hand the He concluded by calling his departed colleague “brilliant.” 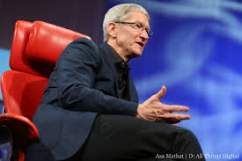 However, harsher criticism was reserved for Google. Rose asked the CEO about the lawsuit he filed against the search company involving the alleged theft of its Java code on Android OS. Google was found guilty causing the animosity between the two firms.

Larry Page became the primary target in this sit down. Ellison cut himself off before he made the statement but the assumption was that he considered Page to be “complicit” when it came to hijacking their stuff.

Larry Ellison should be a happy guy. With an estimated net worth of 43 billion, the Oracle CEO is the third richest man in the world. His company consistently performs well and is one of the most prolific software companies in the world. So why was he so angry when chatting with Charlie Rose? This tech legend doesn’t exactly have a great reputation but his comments come at a crucial time for the sources of his critique. Apple is getting ready to launch this year’s possible iPhone 6 and iPad 5 while Google is working on their new personal computer Google Glass. Ellison is known to be outspoken but who knows what his motives were. The interview is below.