The Google Nexus 5 is rumored to be released tomorrow and a new video shows the first test for the new smartphone. Believed to be infused with the next iteration of Android known as KitKat. However, the reviewer shows that this phone is running on an older version of the software. While this is an interesting look at the new Nexus, it is highly unlikely that this will be the final version.

Cult of Android writes that the alleged Nexus 5 is missing a few key details. No Nexus logo can be seen on the back while there is no transition bar for the camera. It still contains the bulky look of the Nexus 4 but that specific segment of the product line to possibly prepare for the arrival of this new invention. The phone is rumored to be announced tomorrow but Google has released nothing substantial to support these claims. Ultimately, this video is still the best look we’ve had so far at the new phone but we’ll have to see if it will surface again on Tuesday. 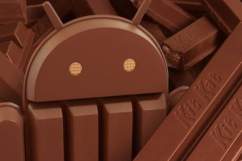 Read More
Android, Google, Nexus 5, Smartphones
A new video claims to show the new Google Nexus 5 in a hands-on review that tests nearly every feature but should you buy it? Watch this video to find out.