Google released the Nexus 5 yesterday. For $350 off-contract, the phone offers a huge amount of bang for the buck, and will be the first phone to feature Google’s new operating system, Android 4.4 Kitkat.

Size, Winner: Tie — the phones are virtually identical in size and weight.

Display, Winner: Tie — each has 1080P resolution. AMOLED can be brighter and more colorful, but hard to tell without a working Nexus 5

Both the Nexus and the Galaxy clock in with full 1080P, 1920 x 1080 pixels. The Nexus has an LCD screen so it may be less vibrant, according to some reviewers.

Performance, Winner: Nexus 5 — the processor is faster and its version of Android lacks ‘bloatware.’

Each phone has a Qualcomm Snapdragon four core processor. The Nexus 5 has the 800 and the Galaxy S4 has the 600. They clock in at 2.26 ghz and 1.9 ghz respectively. Both phones have 2GB of RAM.

On processor alone, the Nexus 5 is faster, but Android 4.4 Kitkat will likely give an additional performance enhancement by being free of carrier modification and “bloatware.”

The Galaxy S4 will be upgradeable to Kitkat 4.4, but it will likely happen considerably after the Nexus 5 is in hands of consumer; this is a strategic advantage for Google.

A further difference is the S4’s custom “Touchwiz” interface. Some like it, and some hate it, but it may be an advantage over the Nexus 5’s feature set. For instance, the interface can automatically dial someone if you are texting them, and put your phone to your ear.

Battery, Winner: Tie — the Nexus 5 has a smaller battery, but has the same performance rating of 17 hours talk time.

The Nexus 5 has a 2,300mAh battery while the S4 has a 2,600 mAh battery. Despite this, Google alleges identical talk time.

The Nexus 5 has yet to be tested, but it stands to reason that the phone has efficiency enhancements because of the new OS and engineering innovations.

In terms of detail, the Galaxy S4 sees more detail. If megapixels is less of a factor, the Nexus 5 does offer image stabilization.

The S4 also has a microSD card slot. The Nexus does not.

Overall, Winner: Nexus 5 — The S4 is a great phone, but it doesn’t pack $200 worth of punch more, which is what it costs. But if you can get it for less than the Nexus 5, go for it 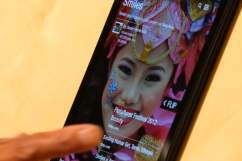