On January 1, an unidentified hacker posted the username and phone numbers of 4.6 million Snapchat users to the now defunct SnapchatDB.info. In the interview, which you can hear above, Spiegel explains that the hacker exploited a new feature of the app that allows a person to see the phone number of Snapchat “friends” by acquiring 4.6 million friends. However, it takes Today‘s Carson Daily to bring up the fact that Speigel was warned by a security firm days before the attack that user’s information was vulnerable, and yet nothing was done.

“I believed, at the time, that we had done enough,” he said on Today through an arrogant smirk and nonchalant chuckle. Meanwhile, the Internet is in an uproar that Spiegel owes Snapchat users an apology which, unfortunately, will probably never come. For now we’ll have to be satisfied with Snapchat’s December 2 pass-the-buck blog post. 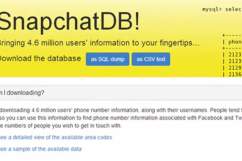 How to Find Out if Your Snapchat Info Leaked