Which new Android smartphone is best? We pit the Samsung Galaxy S5 (pictured above) against the new HTC One.

The Samsung Galaxy S5 will retail for $199.99 with 2-year contract. Silicon Angle has a great breakdown of the exact fees and special offers being extended to S5 buyers across the major carriers in the US.

The new HTC One will also retail for $199.99 with 2-year contract. You can learn more about pricing options for this phone in our price and release date breakdown.

As we discussed in our specs & features guide for the Galaxy S5, the flagship Samsung phone boasts a camera with an auto-focus that is the fastest on the smartphone market. It focuses in just .03 seconds. The camera also has advanced HDR, allowing you to take photos with richer colors. The rear camera is 16MP, while the front camera is 2MP.

In our HTC One M8 price and features rundown, we laid out the specs on the new phone’s camera:

“The new HTC One has a “duo camera,” which enables the phone to take more lush, attractive images. The duo camera automatically knows what parts of an image are in the foreground, and what are far away…

When shooting video, you can pause, reframe your shot, and then continue shooting. HD Slow-mo video is now also supported…

The new HTC One offers a 5MP, wide-angle front camera, making this phone great for selfies or videoconferencing.”

The Samsung Galaxy S5 and the new HTC One both run Android 4.4.2 (Kitkat).

The new HTC One boasts a 5-inch screen, a Snapdragon 801 processor, and a MicroSD card slot. The device runs Sense 6, which is a HTC-only interface that improves on the basic Android platform.

The Samsung Galaxy S5 has a reported 10 hours of battery life when surfing the web on LTE. The phone also has an ultra power-saving mode. At the phone’s launch event at the Mobile World Congress, Samsung execs stated that ultra power-saving mode would turn the display to B&W, and shut down all features except for SMS and calls. When your phone has 10 percent battery charge, it can last for 24 hours on standby in this mode.

The new HTC One also has a battery-saving mode. The new HTC One M8 has 40% better battery life than its predecessor, and can hold a charge for two weeks while in standby mode.

Other cool features found on the Samsung Galaxy S5 include a heart rate monitor, and the ability to sync with Samsung’s wide array of smartwatches and fitness tracker wristbands. The S5 also supports “private mode” browsing.

The new One’s most unique feature is the “Dot View” case, pictured above. This lets you see who is calling, check the time, or see weather conditions nearby. It’s like a smart Lite Brite display on the back of your phone.

The new HTC One M8 smartphone is the next in the line of award-winning One phones. If you prize exceptional design and a clean UI, the HTC One is likely to appeal to your sensibilities more than the Samsung Galaxy S5. That being said, the S5 has a slight edge when it comes to catering to fitness fanatics. 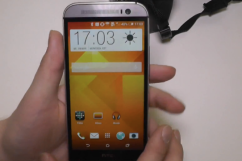