Pretty much every new version of iOS has gotten some sort of facelift, either in terms of icons, animations, or overlook appearance. The screenshot above showed up on the Chinese site Weibo earlier this week, and is allegedly a sneak peek at what iOS 8 will look like. The screenshot above shows icons for some new apps, as well as icons for existing apps. These icons are likely to get some additional polish prior to the official launch of iOS 8.

The audio from this year’s SXSW festival talks about the future of wearable tech devices, such as fitness trackers and the iWatch.

One icon image shown in the leaked screenshot was “Healthbook,” which is reportedly the new-for-iOS-8 health & fitness app. It is rumored that this iOS 8 feature will offer sync with the iWatch product, and potentially act as a pedometer or calorie burn estimator tool.

In our article about iOS 8’s health features, we also discussed the fact that Apple met with the FDA last year, and filed a patent for a heart rate monitor. These are further indications that iOS 8 will be health-centric.

Dear Apple: All I want in iOS 8 is the ability to make Siri sound like Paul Bettany. Thank you.

Design & Trend reports that iOS 8 is likely to include Siri improvements. Rumored improvements include the ability to book a car rental or place a hotel reservation, or for Siri to launch an app based on what you’re doing at the moment.

4. iOS 8 May Have Improved Maps

The video above compares Apple Maps and Google Maps.

Given Apple’s recent launch of CarPlay, it makes perfect sense for iOS 8 to feature improved maps. This will allow for improved navigation, and hopefully dispel the last of the bad feelings consumers have about Apple Maps. As many Apple fans will recall, Apple Maps faced heavy criticism in 2012 when the Maps app malfunctioned and gave erroneous directions.

The video above outlines what to expect with the iPhone 6, which is expected to ship with iOS 8 installed.

MacRumors reports that iOS 8 may feature upgrades to the TouchID system that would make mobile payments even easier. MacRumors writes:

“Such a system would be tied to the Touch ID fingerprint scanner first introduced with the iPhone 5s, which Apple CEO Tim Cook confirmed was designed with payments in mind. Mobile payments are an opportunity that Apple has been ‘intrigued’ with and something that it plans to pursue.” 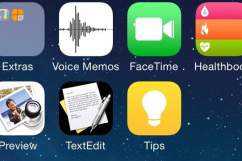 iOS 8 Screenshot Leak: Is This Real or Fake?